Correspondent "Not Who" sent me an item about an anime and video game: 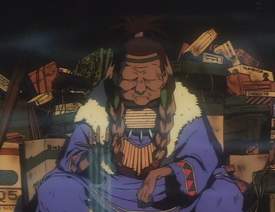 Comment:  This character looks like your standard generic wise elder or medicine man. I don't see anything distinguishing him from thousands of other fantasy Indians. Locating him in a fictional world unconnected to any land or culture only compounds the problem.

For more on Indians in video games, see Assassin's Creed 3's Native Heritage and Justin Rain in Transmedia Defiance.
Posted by Rob at 7:54 AM