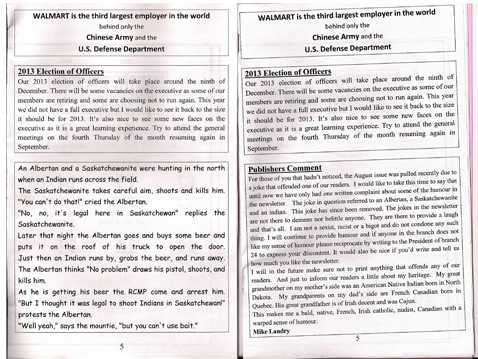 The fallout over this "joke" continued for several days.

By Jorge BarreraLegion head appalled by anti-aboriginal joke in newsletter

B.C. chiefs demanding a formal apologyComment:  This so-called joke falls into the "only good Indian is a dead Indian" category. In other words, Indians as good-for-nothing and worthless---literally without value except as targets and trophies.

Email ThisBlogThis!Share to TwitterShare to FacebookShare to Pinterest
Labels: humor, racism, Stereotype of the Month, stereotypes

There is nothing funny about murdering innocent people. Those who do, are seriously deranged.

An editorial reminds us that the Legion is supposed to support the military, including Native soldiers:

When Shirley Green, a Legion member who is part Ktunaxa and part Cree, complained about it, the joke was taken out and a bizarre explanation published instead, stating that one person had taken offence at it, but the joke had been considered good for a laugh. No apology was forthcoming. In fact, Legion branch president Edith LeClair complained to reporters: "Obviously, people can't take a joke."

Oh, it's a side-splitter all right. This "joke" has slurred the memory of the brave deeds performed by aboriginal soldiers in fighting for this nation--many of which cost them their lives.