Syracuse mascot in The Express

I recently watched this movie:

I didn't think much about this, but then The Express showed what looked like Allan Houser's Sacred Rain Arrow sculpture--a crouching Indian shooting an arrow into the sky--on the Syracuse campus. Then I remembered that Syracuse once had an Indian mascot.

Here's the story on that:

The movie confirmed the connection by showing a few shots of an Indian chief mascot on the sidelines and on banners.

Some images from the Internet show the former mascot situation at Syracuse: 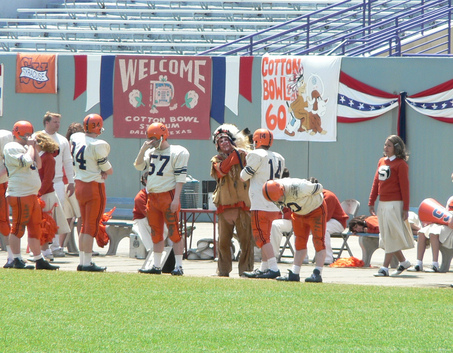 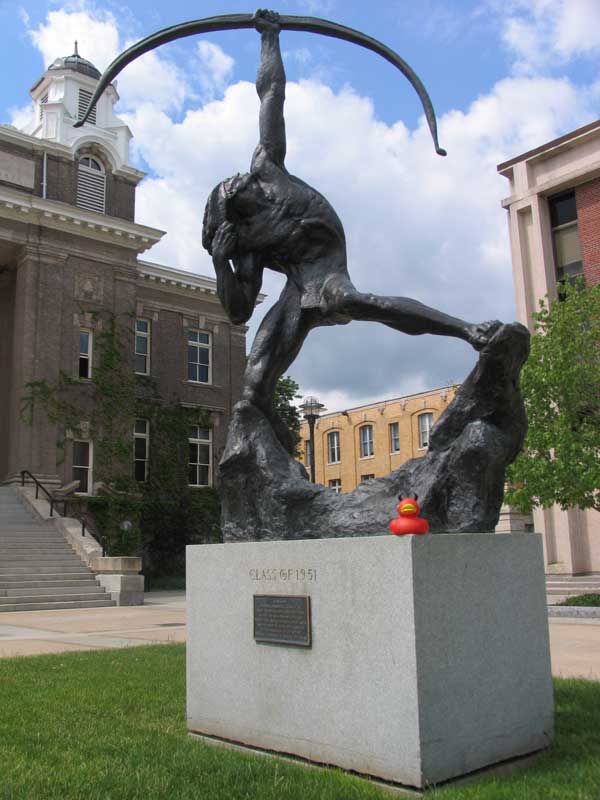 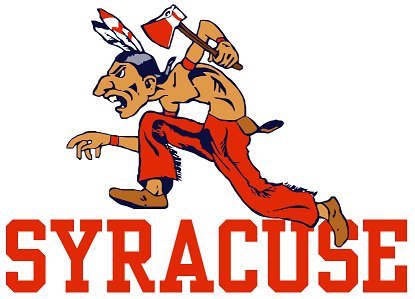 Note: I think The Express used Houser's crouching Indian, not the standing Indian shown above. Perhaps the filmmakers had to digitally create the statue in the quad and chose Houser's more compact version.

And the whole thing was based on a phony legend. An entire tribe was compressed into an anonymous "Saltine Warrior," who sounds like a marketing gimmick for crackers. Not surprisingly, this was one of the first Indian mascots to go.

I'm not sure what the filmmakers were thinking when they showed the Syracuse mascot. Perhaps they included shots of it because they felt it was historically accurate. Perhaps they had only a limited number of film clips and couldn't edit the mascot out. I don't know.

But this explains the lacrosse scene. The filmmakers wanted to link the Syracuse mascot to a noble Haudenosaunee tradition: the lacrosse game as spiritual exercise. Not to its actual source, the Onondaga hoax that inspired the Saltine Warrior. The lacrosse scene provides a false but believable justification for the mascot shots.

Anyway, The Express is a typical feel-good sports movie. It gets points for linking Davis's story to the civil rights movement, but loses points for fictionalizing history so blatantly. Rob's rating: 8.0 of 10.

For more on Indian mascots, see Even Sioux Voted Against "Fighting Sioux" and Animals, Objects, and Professions.