A New York magazine story proposes a vast left-wing conspiracy at the movies. It's as fanciful as celluloid itself

By Erik LundegaardLundegaard goes on to talk about the movies' influence:Comment:  Lundegaard doesn't go into race and gender, but he could have. The type of movie Hollywood favors is the type with white male leads. The studios don't come close to making movies representing the 36% of Americans who aren't white.

A class bias is also obvious. Most characters are implicitly middle-class, college-educated, from stable homes. The guy who discovers the plot or falls for the girl is rarely poor or disadvantages.

And in the few movies with nonwhite characters, the leads often get replaced with white actors. The Lone Ranger, The Last Airbender, Twilight, The Hunger Games, Crooked Arrows, 21, and so forth and so on. You can count the minority actors who regularly play lead characters on one hand (Will Smith, Denzel Washington, Jackie Chan, and...?).

For more on the subject, see Hollywood's Cultural Conservatism and Indians Hold Steady at 3%.

Below:  Casting for The Last Airbender. 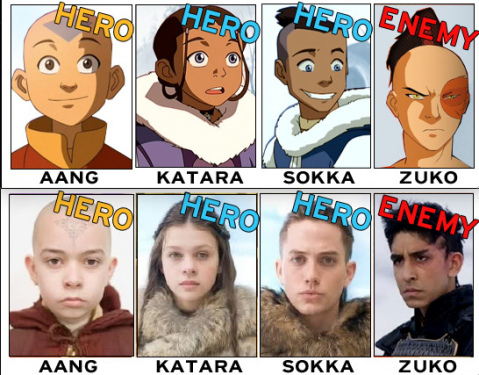 Hollywood is and has always been a tool for the conservatives. Its history is spotted with propaganda reels since DW Griffiths reinvention of the KKK as "saviors" in BIRTH OF A NATION; L Frank Baum of Wizard of Oz fame published genocide as a solution to America's "Indian problem"; the US gov't sponsored racists propaganda cartoons about ALL Japanese and German peoples as evil; Mexicans and Blacks were stereotyped as lazy and stupid even up to the Warner Bros Looney Tunes animations of the 1960s and 70s. Much of these media releases spawned generations of Americans ignorance and ideals towards minorities and todays network bosses still retain preference of white films via anglo actors potraying ethnic characters; writers and storys that repeat anglo themes over and over again simply replacing the popular male and females of the day. Its boring and recycled. How is this not a facists industry? We now have celebritys trained in military reality shows. How does this not make the armed forces and war an entertainment value? How is this a liberal Hollywood when the nations people are spoonfed bloodshed, violence, sexual promiscuity and racism? Where are the minority reality shows instead of Garage Wars; Jersey Shore; Pawnshop; Bikershops; WWF fake wrestling drama and Gator Hunters. All these shows represent trailer trash culture as American apple pie. I want to see more feature films, sitcoms and reality shows that show Americans we never see. I want to see a fat minority guy opposite Limbaugh get a chance to be a bigot and hater for once. Then you might have a liberal media.

They're also making a film version of All You Need is Kill. Not surprisingly, they're going to be "completely American" (Read: white). And this even applies to the half-Japanese/half-Indian Peruvian girl.