By Lee RosenbaumComment:  Both the shape of Ironworker Cradleboard and the image within it evoke the idea of a skateboarder. If there's a comic-book influence, it's more Silver Surfer than Spider-Man. The ironworker's pose and perspective, and the cradleboard's color, all suggest the Surfer.

Since Hemlock included an image of Spidey--for the Spider-Man play on Broadway--he may be familiar with Marvel's other characters. He could be going for a theme of the Mohawk ironworker as a noble, self-sacrificing hero for his people--like the Surfer. The cradleboard would suggest the ironworker is doing it for the children. 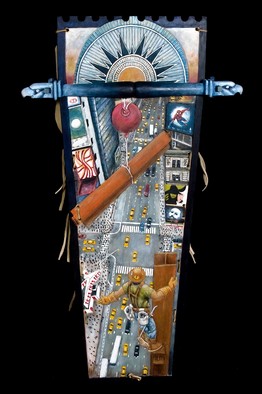