My take on the Colbert "ching-chong" controversy, recounted here:

Interesting case study of how (not) to do satire.

The tweet certainly seems offensive on the face of it. But the same quote appeared "in context" as part of Colbert's report on the Redskins.

So the context is necessary for the "joke" to work. And so is the meta-context: that Colbert is only playing a right-wing racist.

If your satire requires everyone to understand the context and the meta-context, it's arguably a failure. Satire should be self-evident without the layers of context. If the quote seems racist on its own, perhaps it's racist "in context" as well.

People have been saying women, blacks, gays et al. are [insert negative adjective here] forever, then claiming it's a "joke" or a "satire." I suspect that's what they said when someone criticized blackface performances or Amos 'n' Andy. "We don't really think these people are buffoons. We were just having fun."

For a similar controversy, see:

'The Onion' Draws Criticism for a Tweet About Quvenzhané Wallis

This posting led to a discussion with some Facebook friends: I'm not exactly saying he's racist. But I think he comes from a white-privileged position that makes him somewhat tone-deaf. He thinks making a racist Asian joke to satirize racism against Natives is harmless because, well, he's white and neither form of racism affects him. He's not well-qualified to judge how a minority person might react.

The people who would say "Oh, Colbert" would also say "Oh, the Onion" (in the example above). They'd also say "Oh, Don Rickles" or "Oh, Rush Limbaugh"...he mocks everyone. So again, who's famous enough as a comedian or a critic to get away with these comments?

How do you draw the dividing line between, say, Colbert and Limbaugh, who could both utter the same line and both say they were joking? And if the audience has to make these meta-contextual decisions about who's joking and who's not, how is that not an immediate failure? If you have to decode a satire, that means it hasn't worked.

I'm guessing close to 100% of the population understood what Colbert was doing--including the conservatives who criticized him. But understanding his intent doesn't necessarily negate the effects.

He's putting it out there that Asians speak in a "ching-chong" way, even as a joke. I'd suggest this influences people the same as every other stereotype: blacks are criminals, Indians are savages, Arabs are terrorists, etc. Even if people say they get the joke on an intellectual level, it may affect their beliefs.

Let's put it this way. Can you prove stereotypes like "ching-chong" do not affect people's perceptions on a subconscious or irrational level? If not, then it's best to avoid them. Even as "jokes" intended to make a point about something else.

Depending on the circumstances, there are several potential differences:

2) Words such as "spades" and "kikes" are slurs rather than stereotypes. Obviously they're negative, but they don't describe someone's appearance or behavior. The "ching-chong" voice, like an Indian in a headdress or an Arab with a bomb, does.

3) A cartoon or image makes only a momentary impression. It's not a bit that goes on for a minute and then gets retweeted, compounding the problem.

Overall, it probably goes back to the context question. In the context of a critical analysis of mascots, for instance, a "Chicago Kikes" banner might be an acceptable way to make a point.

But you probably wouldn't go to an NFL game, wave the same banner for an hour, and later explain you were satirizing the Redskins. Some people would get the "satire" and some probably wouldn't.

Even if they understood the intent, Jews might say, "We got the point in the first three seconds. The other 59:57 of banner waving just offended us. The banner didn't change over the hour, but the effect shifted from satirizing a slur to perpetuating it."

Below:  Stereotypes or satire of stereotypes? What's the difference, if any? 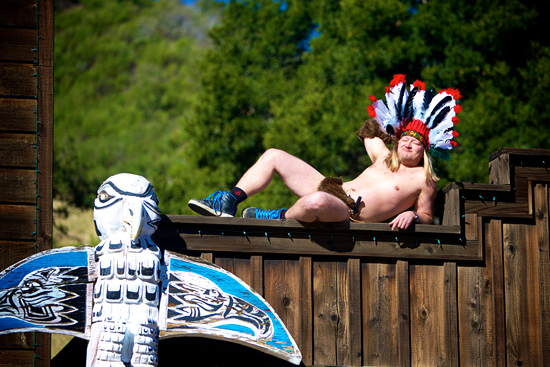