In the All Tapped Out episode of The Good Wife (airdate: 4/20/14):At a hearing, the NSA refuses to discuss the whistleblower's job performance, claiming it's classified. The Florrick/Agos lawyers counter:

The Good Wife: All Tapped OutComment:  I'm guessing the threatened lawsuit would go nowhere fast. It might get thrown out before it even went to trial.

But it's good to see a TV show acknowledge Native issues, even obliquely. Like Castle, The Mentalist, and a few other shows, The Good Wife is aware that Natives still exist. 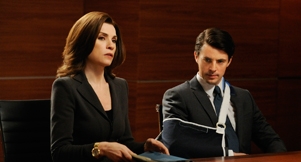