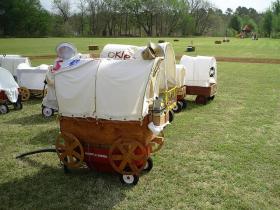 By Joyce Griffin OberlyIn contrast to the schools' happy reenactments, some actual history:

Comment:  I'm not sure kids should be reenacting any part of US history, including the uncontroversial ones. Take the signing of the Declaration of Independence, for instance. What educational value does it have to reenact it--as opposed to reading about it?

The reenactment is mostly propaganda--sending a message about how great and glorious the American enterprise is. Well, what would the British loyalists say? What would the Indian tribes, who mostly sided with the British, say? The reenactment sends the message that this history matters and other histories don't.

The first school eventually instituted an Oklahoma History Day, which includes a Native perspective. It sounds like that perspective is only one of many, so it's not as if they're seriously trying to counteract the settler story.

And we don't know how this one day compares to the Land Run festivities in scope. I'm guessing the Manifest Destiny narrative still predominates.

The school's initial response is telling. As with the Pledge of Allegiance, if you challenge the government propaganda machine, you get punished or shamed. Message: Conform and submit!

Anyway, play-acting the Land Run contributes to several stereotypes: that the land was empty and free for the taking. That Indian nations weren't using it "productively." And that conquest and land theft is something to be celebrated rather than condemned. For these reasons, these news items are a Stereotype of the Month entry.

For more on the subject, see Empty Land in True Grit.
Posted by Rob at 12:00 PM