Why no NFL crackdown on racism?

As expected, critics have noted the contrast between the NBA's ban on Donald Sterling and the NFL's embrace of Dan Snyder:

By Aaron C. DavisThe NBA won't tolerate racism, so why does the NFL tolerate 'Redskins'? By Chris WeigantFirst Nations and the repugnant, racist side of pro sports 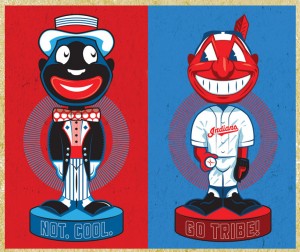 No tolerance for racism (against blacks)

Some thoughts on why black players spoke out against Sterling:

By Jacqueline KeelerShort version: Because America has repudiated explicit racism against blacks but not Indians.

And some thoughts on why many people spoke out against Cliven Bundy and Donald Sterling:

This Town Needs a Better Class of Racist

It's easy for polite American society to condemn Cliven Bundy and banish Donald Sterling while turning away from the elegant, monstrous racism that remains.

By Ta-Nehisi CoatesAnd:Comment:  This applies to the Washington Redskins, Chief Wahoo, and other examples of sports stereotyping. "They didn't mean any harm," people tell themselves about the offenders. "They didn't attack or insult Indians. They're just thinking about their teams, their fans, and 'tradition.' As long as no one's compared to a slave or treated like an animal, what's the problem?"

And so the racism in America continues. Perpetuated by people who assure themselves they aren't racists. "It's bad people like Bundy and Sterling who are the problem, not me."

For more on the subject, see What Bundy and Sterling Tell Us and First Sterling, Then Snyder?
Posted by Rob at 5:00 PM