Okla. Indians Balk at English-Only BillComment:  What a relief to know that the English-only movement wants to assimilate non-Anglos, not eradicate them. For a second there, I thought assimilation and eradication were the same thing. 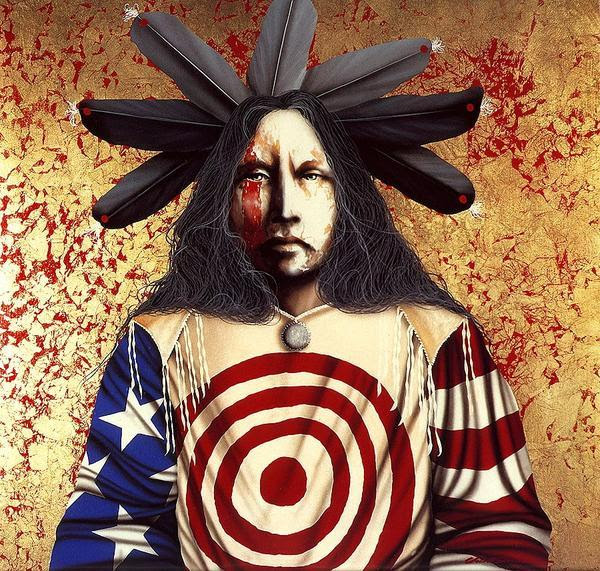 Writerfella here --
writerfella has opposed and even lobbied against the U.S. English Movement ever since he first encountered it in 1969. Simply stated, its reported policies of assmilation, standardization, and linguistic uniformity in fact mean little more than racism and enforced mongrelization. As long ago as then, writerfella knew the English-Only forces clearly were a threat to Native American languages and cultures, as languages and culture both are are complementary and inseparable. Oddly, if uniformity in language truly was what the movement sought, why would not they have called themselves "American English" or even just "American". The English speak English and so Americans speak American. THAT'S only the first clue. Over the years, extremists in the U.S. English movement have railed out at 'non-English names' of various of the United States, various cities, and even place names. There even was a call to halt the importation of foreign-language films and television. It's likely such people have one foot in U.S. English and the other in PETA. In the last two state elections, the Native vote became pivotal to Oklahoma governors, state senators and representatives, and to U.S. Congressional candidates, as well. The authors and sponsors of the English-Only bill now before the Oklahoma state legislature have been put on notice that, if the bill continues to proceed, an entire segment of the Oklahoma electorate will remember their faces and their names at election time. Each of the above also received personally-addressed letters to the same effect from writerfella, who as a writer and commentator certainly would be a force with which to be reckoned.
All Best
Russ Bates
'writerfella'

One foot in PETA...why? Because PETA is so extreme? It's more likely their spare foot is in the border-patrolling Minutemen, the abortion-blocking Operation Rescue, or a similar right-wing organization.

In fact, I bet there's a strong correlation between the English-only movement and such anti-Indian groups as One Nation or Upstate Citizens for Equality. The common denominator is the notion that America was founded by and for WASPs.

Writerfella here --
Hmm, only a guess, but writerfella bets we know where Yeagley stands (or lies prone)...
All Best
Russ bates
'writerfella'

Writerfella here --
And that is one place where we agree wholeheartedly, Rob: "The common denominator is the notion that America was founded by and for WASPS". EuroMan destroyed and otherwise subdued the naked wild Indians so it would be safe for his own children to run loose like the naked wild Indians. But then again, if it was made safe for WASPS, then were Killer Bees to be that much far behind?
All Best
Russ Bates
'writerfella'