Someone posted this image on Facebook and asked the following: "In the side-by-side image below, 1) Which is 'OK' & which is 'Wrong'"?

Everyone agreed the first image was wrong, but several people defended the second image. Naturally, I disagreed:

No. 1 is wronger, but they're both wrong.

I dissed this video from Jana long ago:

Let the debate beginI doubt many modern Native women would say they feel "honored" by either image. Especially if you explain the history of sexual objectification to them.Jana may think her stereotyping is okay, but I don't.[This respondent incorrectly thinks I'm an atheist rather than an agonistic.]

Even though I'm a nerd, I probably don't look like one. But I could stereotype myself as a nerd with the Brylcreamed hair, black-framed glasses, high pants, pocket protector, calculator, etc. This would be wrong because it doesn't represent the real world of nerds.

Same with Jana, a Lumbee from North Carolina, wearing a Pocahontas outfit in Monument Valley for a music video in 2007. Her getup literally has nothing to do with her reality as a modern Lumbee Indian woman.If she wants to show her sexy side, she can come up with something besides a Poca-hottie costume. That outfit is a centuries-old stereotype, not a unique expression of her individuality. There's nothing unique about it since it's been done a million times before.

"Bo Derek" look is "spot on"?Here's the context for the Jana photo on the right. It's a music video with her and other Indians as noble savages. In the year 2007.

‎"The girl on the right looks pretty spot on with reality to me"...which reality do you mean? The reality of Indian girls like Pocahontas in the 17th century?

It wasn't real even then; Pocahontas probably went naked or topless. And it certainly isn't real now. No Native woman has worn a real-life outfit like that for centuries, if ever.

Native people don't care?Actually, Native people often protest images like the ones above. They know that stereotypical perceptions affect how they're treated in real life. IOW, if people think Indians are savages, they treat them like savages.No, but I've read books that cover Native American history from the beginning to the present, with lots of illustrations. No Native women wore sexy buckskin mini-skirts that I recall.

I doubt Jana has read more Native history than I have. And found a culture I'm not aware of. It would be an incredible coincidence if an actual Native outfit just happened to resemble millions of sexy stereotypes objectifying Native women.

And the only excuse for wearing a traditional Lumbee outfit would be to portray her ancestors accurately. But she's not doing that. She's cavorting in a music video set in Monument Valley, 3,000 miles from her ancestral home. She's singing, dancing, and playing with a hawk. None of these have anything to do with traditional Lumbee culture. Indeed, they're a complete fabrication of what Native culture is about.

You do understand that there were thousands of different Native cultures, right? You don't get a free pass for wearing a chief's headdress because some Indian, somewhere, once wore one. Unless your culture wears an outfit now, or your ancestors wore an outfit then, it belongs to another culture, not yours.

As for the context, the image on the right comes from a music video. It doesn't represent any era. What it represents is a fantasy version of what Native women looked like in the past. A fantasy used by the white, male, Christian powers-that-be to objectify, demean, and belittle Native women.

Y'all are aware that Native women suffer horrendous rates of rape, violence, and abuse, right? Why do you think that happens? It happens in part because we've treated Native women as sexual objects for 500+ years. These images perpetuate the notion that Native women exist to fulfill male fantasies.For more on the subject, see Review of For the Generations and Indian Women as Sex Objects

P.S. Do I have to explain what's wrong with the costume below? It's wrong for the same reasons that Jana's outfit is wrong. 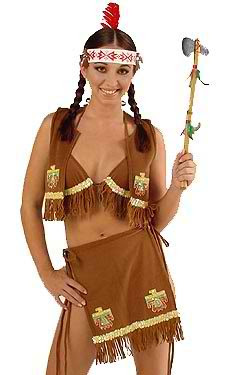 From looking at her You Tube page you can see this entertainer has decided that she has to join the crowd of sex kitten singers.. Eye candy is nice, but not at the expense of playing into the stereotypes.
On the other hand screw what the white folks think,we can be as bad as the next guy when it comes to chasing the almighty dollar.