I finally saw the 2010 remake of True Grit. As you may recall, I reported on it in:

As my correspondents indicated, there were three scenes involving Indians. Let's go through them:

I don't necesarily mind hanging an Indian in fiction, but it was played for laughs and not given any context. Melvin Martin and an anonymous commenter speculated that the Indian must've gotten what he deserved, but they have no idea. He could've been guilty of anything from cold-blooded murder to a legitimate rebellion against white oppression. (See the Mankato 38 for details on the latter.)

If you believe in justice, why wasn't the Indian given a chance to utter some last words? This omission hints at how one-sided the white man's "justice" was and is. Whites get fair treatment; Indians don't.

Melvin Martin thinks one of these children was a "malignant dwarf," which is silly since the child actor was named. The commenter thinks the children were "terrorizing a mule" with a broom, but if so, that went by so fast I didn't notice it. Even if they swatted the mule, kicking and knocking them over is a gross overreaction to a childish prank.

More to the point, it's totally gratuitous. It doesn't do anything to advance the story, and it's inconsistent with Cogburn's character. He ignored the girl who pestered him, so why would he physically assault two boys who weren't bothering him?

Since the scene has no discernible dramatic purpose, it must exist to denigrate Indians. It's a bit of racism, pure and simple. Not the character's racism, the Coen Brothers'.

By that I mean the Indian who takes a dead body for possible trade. Morten Krogh wrote of this character: "It seems it is OK to wash away the Trail of Tears with laughter." I don't think this scene was played for laughs, and there was no reference to the Trail of Tears. I'd dismiss this comment as invalid.

But I've never heard of Indians or anyone else trading a dead body for something. What would someone use it for? The man's teeth for a necklace? His skin for a wallet? His blood for a tasty broth?

I think this bit exists to exoticize the Indian. To make him seem a bit spooky and otherworldly. But let's assume there was a trade in dead bodies that no one knows about.

The scene shows the Indian only from a distance and above. We never see his face or his hair. We know he's an Indian only because Cogburn says so.

This tallies with what I just said. The Indian is supposed to be a mysterious stranger--perhaps like the Grim Reaper. Seeing a real person there would break the spell, so the Coens don't show us his face.

Indians appear a fourth time. At the end, at Buffalo Bill's Wild West Show, we see at least one Indian woman in the background. But it's brief and inconsequential.

We also see a few other minorities in the background. Notably, a Chinese store owner and a black stable boy. So the Coens are aware that there were minorities in the Old West, and they made some effort to include them. That makes their dismissive treatment of Indians all the more glaring. 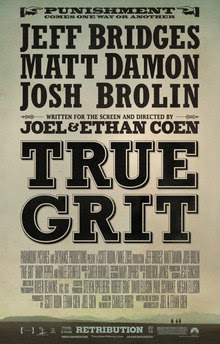