I haven't seen the remake of True Grit yet, but Morten Krogh of NativeCelebs has. He tells us about the Native scenes: 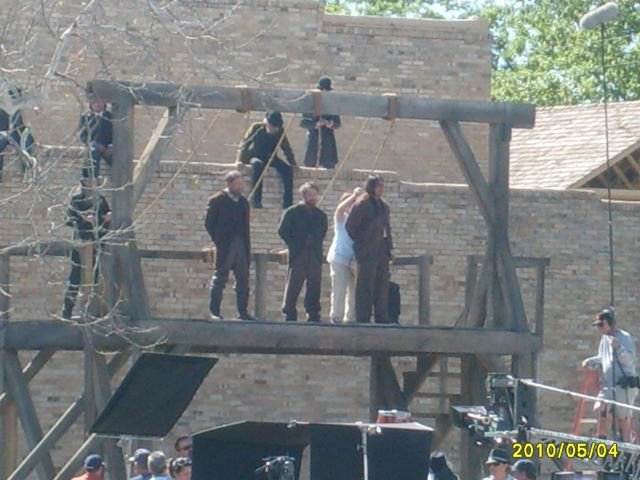 Comment:  I imagine scenes like this happened in the Old West, so they're not wrong for that reason. A better question is whether the scenes were in the source material: the True Grit book. Then there might be some justification for including them.

Even if that were the case, we'd have to ask more questions. For instance, were the scenes integral to the story? Did the book play them for laughs?

Ultimately the blame falls back on the Coen brothers. When adapting a book into a movie, you have to choose which scenes to include. And how to play them. Even if the Coens filmed the scenes exactly as written in the book, it was their choice to do it that way.

Regardless of where the ideas originated, the Coens thought it was a good idea to show Indians kicked and hanged. They could've filmed the scenes so the audience empathized with the Indians. They could've shown characters reacting negatively to the incidents. But apparently they didn't. Apparently they thought encouraging audiences to laugh at injured or dead Indians was a good idea.

A metaphor for Hollywood

We've made these points over and over, but they bear repeating. Hollywood likes Indians in the distant past. It likes them dying or dead and gone. It likes cowboys winning the West, making America safe for democracy, triumphing over the forces of darkness (represented by savage Indians).

P.S. I made minor corrections in the spelling and punctuation of the postings above to improve their readability.
Posted by Rob at 6:16 PM

ew, how sickening. Reminds me of a guest Anthropologist lecturer from America I had years ago. I missed the lecture but my mate said he bragged about converting American Indians to christianity and then shooting up the church that some took refuge in. For some reason this lecturer thought it was a great joke but the whole lecturer theatre fell silent and then starting talking over him. Nobody was interested in what he had to say after that.

Is the blame for this more on the Coens for putting this in the film, or the audience for how they responded to it?

Watching "True Grit", I actually thought that the moment where the white men are allowed their final speeches, but the Indian is silenced before he can make his, could have been an important comment on the unfair treatment Indians received. In a concise manner, a Native American was worked into the plot in a way that made a statement without resorting to depicting him as a savage. Here is an Indian who is fluent, articulate, who wants to speak... but the white authorities won't let him, quickly silencing him.

I think THAT could be looked at as a metaphor for Hollywood. How through the history of the Western, and into modern cinema, there have been Native actors who are versatile, talented, capable of playing many roles, but are too often reduced by the Hollywood system into playing the mute noble savage, or dying while a white man gets to say their epitaph.

So, in theory, I can see how the Coens could have been making a valid point here. But the downfall of the scene, as these various detractors mention, is that the audience laughed. I don't think the way Roger Deakins shot the scene made it particularly comedic. There wasn't a funny music cue when the bodies dropped. THe way it was filmed was pretty blunt and bleak. But the audience laughed. They laughed at my screening too.

Could you say the scene is blackly comic? I suppose. But if the filmmakers try and make a point, and the audience dismiss it as a gag, then yes it's a failing. But I don't think the Coens should shoulder the entirety of the blame.

There was nothing "comical" about the film. As Rob the paraphrasing racist said that "better questions must be asked". One has to wonder if The Coen's actually read the book. I don't know if the film was meant to be a comedy, but it sure as hell wasn't funny. If I'm wrong, then they haven't read the book to begin with. There was nothing humorous about the genocidal policies on Native Americans, or the killing of a human being. And why the audience laughed at the men being hanged, is beyond me. This tells us how sinister the White Man's decepit mind really is.
I'm just quite relieved to that "True Grit" barely got any attention at the Ocars the other night. I suppose this goes to show us that making a humor out of something inhumanly abhorrent such as the "Trails of Tears" or the American Holocaust, isn't exactly Oscar worthy.

"Inception" seemed to win alot of them.

There's also how the audience reacts to it. I mean, the average white person in the 19th century would've thought "Just one less Indian to worry about." Of course, you'd have to indicate as much in any movie dealing with that.

The Western has taken an international theme. Ever see Samurai Champloo? Okuru drops a lot of Indian clichés.

Films have shaped policy and national character for Americans sadly. Although DW Griffiths "Birth of a Nation" is pointed to today as a racist and propaganda film about the portayal of blacks being evil using white actors with painted black faces, its ironic how the African American community is silent on mascot issues, but see the racist policy of being excluded from Cherokee rolls as tribal members.

After all, the Cherokees were slave owners.

During its time, Griffith and L Frank Baum, of Wizard of Oz fame, were popular American standards.

I see no point in beating a dead horse with Hollywood for not getting native writers and directors with the backing of major studio productions and sponsorship. There are just too many Bill O'Reillys and Rush Limbaughs in the Jewish community to understand or want legitimate and historically accurate depictions if native people.

It might take away from the Jewish victimization so well founded in the film industry. I have Jewish blood in my family as well as native blood and they all agree that "some" history is real while the Indian is too profitable to make human and controversial. Naturally, natives are still a "problem" and the "enemy" for lawmakers and leadership across the country, its just no one likes to use the "R" word.

I lost hope when Steven Spielberg did, "Into The West".

While he can show the real horrors and graphic portrayals of a German officer picking off Jews from a balcony in "Schindlers List", or draw out the emotion and sufferage inflicted on African slaves in "La Amistad", he painted a pretty lame for kids movie about the Lakota using halfbreeds and yet, great native actors with toothless dead script, it was insulting. Where was all the mutilation and violence of the Sand Creek Massacre? Where was all the killings inflicted on the US Army from battles against the plains tribes?

All you get in "Into The West", is nearly six hours of a story weave that entails a couple of first cousins having a joyful, passionate incest.

I don't know who is the greater threat against Indians, Hollywood, or the US Government, maybe they are the same, but I think most of these comments grant excuse to filmmakers and the industry as a whole and its business as usual.

you neglected to mention that the two children being kicked around were also torturing a donkey.

way to try to make a name for yourself as a troll.

I don't know about Geno's take on True Grit, but he's stupidly wrong about me. Paraphrasing what racists have said isn't itself "racist."

I don't subscribe to any theory about a "Jewish community" controlling Hollywood or dictating what kinds of movies get made. That sounds like more bigotry to me.

I didn't see any donkey torture when I watched True Grit. Find us a video or a photo of the scene and then we'll discuss it.

Finally, I gather you don't know what an "Internet troll" is. I can't be a troll on my own blog, dummy.