Correspondent DMarks brought this item to my attention:

By Logan WestbrookComment:  Only one problem here: "Mohican" isn't the adjectival form of "Mohawk." The Mohawks and Mohicans are two separate and unrelated tribes: 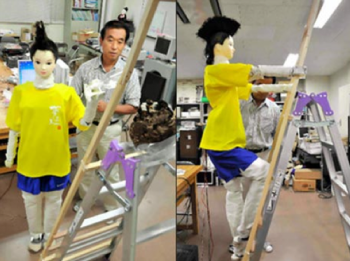 Email ThisBlogThis!Share to TwitterShare to FacebookShare to Pinterest
Labels: Last of the Mohicans, Mohawk

Though I will say the silly hair is a cool touch. Most people don't like robots that look too human. The uncanny valley, it's called. Corpses (and even more so, zombies) tend toward the nadir of the uncanny valley, but even a bunraku (a type of puppet theatre originating in Osaka) puppet is still in it.


The uncanny valley is also the basis of horror movies like The Puppet Master, and the "weird girl with a dark secret" trope in anime.