As you may recall, I wrote about a proposed Idaho law in What Napier Is Ranting About and Tribal Jurisdiction = "Custer Legislation"?! This legislation finally came to a vote last week.

By Betsy Z. RussellAnd:Comment:  Let's reiterate the key points. The new law would've provided more law enforcement...on the reservation only...at no additional cost. And yet the majority of Idahoans--in one of the whitest and most conservative states--opposed it.

Not coincidentally, these are the same arguments white conservatives use against Obama, Muslims, and other "foreigners." They might take our guns! They might throw us in prison camps! They might steal our property, rape our women, and kill us!

And how did these white conservatives react to this reasonable idea to curtail crime on the reservation only? How do white conservatives always respond? With hundreds of attacks and threats. With fear- and hate-filled bigotry. Obama, blacks, immigrants, Muslims, and Indians aren't real Americans. They aren't white and conservative and Christian like "us." We have to crucify them before they crucify us.

There's no other way to say it. Many if not most conservatives are bigots who are prejudiced against other races and religions. Their goal is to protect their white power and privilege at all costs.

For more on the subject, see Political Vitriol in the Giffords Shooting and A History of Conservative Hate Speech. 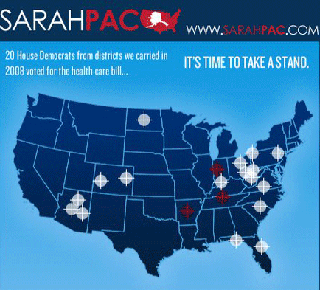 We can find many examples of this conservative fear and hate of "the other." Several of them crop up in the news every week.

Here's one: While most people are cheering the democratic movements in Egypt and other Islamic states, conservatives are looking for any excuse to demonize the rebels and their cause. Columnist Maureen Dowd notes how they responded to reporter Lara Logan's rape:

By Maureen DowdThe criticism of Scott Brown comes from the same place. Conservatives hate anything that smacks of empowering the disempowered: women, minorities, gays. Their ideal is the rugged white individualist who shoots first and asks questions later. The Puritan, the pioneer, the cowboy, the soldier, Ronald Reagan, George W. Bush, et al.

Recognizing tribal authority = improving healthcare = admitting illegal immigrants = building mosques. And so forth and so on. The latest examples of this are the Republican attacks on Planned Parenthood and workers' rights. We also saw this attitude in Bryan Fischer's pro-genocide columns, conservative criticism of the Pascua Yaqui prayer, and the scaremongering over the UN declaration on indigenous rights.

Other examples include English-only laws, bans on ethnic studies, phony concerns about "voter fraud," hand-wringing over ending "don't ask, don't tell," and attempts to repeal various parts of the US Constitution. And of course the demonization of Obama as a Muslim and a foreigner. Each of these battles is about the same thing: asserting the supremacy of white male Euro-Americans over everyone else.

Conservative crybaby Napier basically said what conservatives are thinking when he called the Idaho bill "Custer legislation." It didn't matter what the bill actually did or whom it helped. Conservatives see themselves as Custer valiantly defending white Americans against hordes of brown-skinned savages. If a law is pro-Indian, they think, it's anti-white and anti-America by definition. Because their worldview is "us" (white male Euro-Americans) vs. "them" (everyone else).

For more on the subject, see Gray vs. Brown Americans, What "I Want My Country Back" Means, and Culture War Over Who's American. 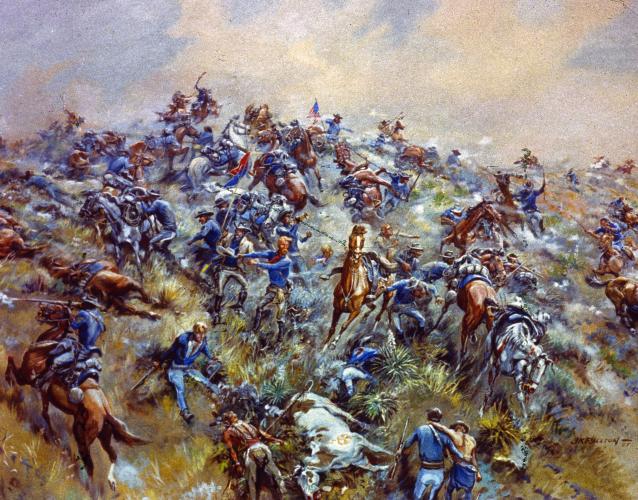 This is just one reason(among many), why GOPsuckers/RepubliFOOLS are not your friend. That is, if you are a Native within or outside of Indian Country.

The Republicans are on the side of workers' rights for a while. From opposition to "Card check" (and defending the right to a secret ballot) to the Wisconsin governor looking out for the rights of the majority of workers who don't want anything to do with unions, and don't want to be forced to join or pay money to them.

Well, dmarks, that all depends. There is, of course, the argument that the current work against unions is a form of what Marx called "false consciousness", or what we now refer to as "Stockholm syndrome".

As for the rape, well, what can I say, Rule 34. No exceptions. What I mean is, sadly, when a society gets to the point of these echo chambers (such as on the internet), it becomes perfectly acceptable to say how awesome it would be to gang rape a reporter.

I'm not sure what Rule 34 is or what echo chamber is but the fact that it seems acceptable to use "rape" as a punishment for any women who speaks out or does something unpopular politically is nothing more than an indication of the sexism and misogynism inherent in Western Society.

This week, the Presidents wife gets attacked over her campaign for health and diet. It is a very important and much needed debate, especially in Indian country with diabetes, around the country as Americans are insanely obese and overweight not to mention cancerous.

Non-natives do not understand nor recognize Native sovereignty at any level, not just law enforcement, but look at the flip side, non-native law enforcement all over America are constantly caught in a string of on-going corruption, rape, murder, pedophilia and police brutality, yet, most states and jurisdictions are reluctant and hard pressed to prosecute or investigate corrupt police practices.

Seattle is just one city. Recently in Oklahoma, another cop, and I repeat, ANOTHER cop got caught. Its only a matter of time before we see this continuing saga of corrupt law enforcement continue.

This is racism in its purest and systematic form. Where Indian police are held accountable and to the extreme level of responsibility while non-natives simply walk through the raindrops without being held accountable for anything at all! Makes it hard for the one or two non-native cops that are really doing a good job, but most times, police have a "elitist" and "members-only" approach to communities.

Most tribal police are too small to get rogue, but there are exceptions I'm sure.

Earlier this morning, Fox broadcast the results of a USA Today/Gallup poll on whether Americans believe their states should take away collective bargaining rights for public sector unions.
USA Today Gallup Poll

As you can see from the chart on the right, the poll showed that the overwhelming majority of Americans oppose union-busting, with 61% against taking away collective bargaining rights and only 33% in favor.

But that's not what Fox told their audience. In fact, Fox claimed the poll showed Americans supported union-busting. To accomplish this, they simply reversed the numbers.

Union battle in the Midwest a pull for political power

"This is all about pure political power," said Paul Maslin, a party strategist whose office is just a block from Wisconsin's Capitol. "If they break the unions here, it will spread state by state, nationwide."

Wisconsin Gov. Scott Walker has proposed deep cuts in benefits for most state workers, saying the belt-tightening is necessary to help close a projected $3.6-billion deficit. Labor unions have agreed to cuts in retirement and healthcare plans; if givebacks were the only issue, the impasse would presumably have ended by now.

But Walker, a newly elected Republican, has gone further by seeking to strip state employees of most of their collective bargaining rights. He would also make it harder for unions to organize state workers and collect dues, moves that could diminish labor's clout and deplete its coffers, ultimately hurting Democrats who lean on that support.