Here's some background on Bryan Fischer, the neo-Nazi pundit for the American Family Association:

A Christian Warmonger on Steroids

By Laurence M. VanceFischer wrote a second column defending the first column. Vance continues:Comment:  Fischer's ideal candidate for the medal probably would be Custer (Washita massacre) or Chivington (Sand Creek massacre). I'm sure he'd agree that our Indian wars were as "just" as any other American war.

This article obviously sheds light on Fischer's column arguing for the slaughter of savage Indians. Summing up his position, if white Christian Americans kill people, it's good by definition.

For more on the subject, see Critics Slam Fischer's Racism and Fischer:  Natives Had No Morals.

Below:  Dead Iraqi child or future terrorist? Does it matter? Either way, Fischer cheers for the Americans who killed him. 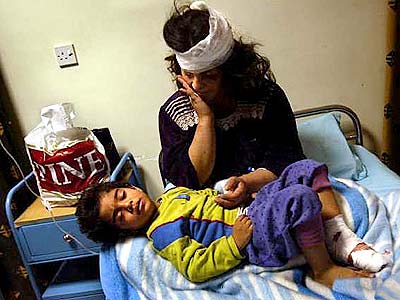 I don't even think Fischer knows how the military acts. One big part of a typical military operation is doing things great (taking care not to kill kids) and small (learning local protocol) to make sure that the locals have a high opinion of you so that you don't face more enemies down the line.