Comment:  Adrienne doesn't quite say it, but I think there's a reason Curtis posed his subjects as stoic Indians. He wanted them to look serious, somber, and grim to reflect the idea of the "vanishing race." Having them smile would've conveyed the idea that they were alive, thriving, and looking forward to the future.

This would've sent the "wrong" message to viewers--a message they wouldn't have understood or accepted. Indians have emotions--they laugh and cry--like real people? You mean they're not animals who deserved to be hunted down and corralled in reservations? Inconceivable!

It would've been like photographing a princess playing in the mud or a cannibal eating tea and crumpets in a Victorian parlor. Images like that would've caused a scandal. Today we expect art to challenge our preconceptions, to teach us something about the world. In Curtis's time, not so much.

For similar reasons, we criticize cigar-store Indians and other wooden Indians. And Indian mascots, which are usually stern-looking Indians from the 19th century. The overarching problem is the same: Indians frozen in time, static and unchanging, with no apparent thoughts or feelings. A series of one-dimensional stereotypes--the chief, the "brave," the "squaw"--with nothing to recommend them.

In literature you occasionally see Indians compared to stone-faced mountains. The writers probably didn't intend to stereotype Indians, but they've unintentionally demonstrated the problem. The Curtis photos, cigar-store Indians, and Indian mascots all portray Indians as superficially as a stone-faced mountain. They all render Indians as lifeless as rocks.

As for the video, I love the concept. It does indeed bust a few stereotypes and show the diversity of today's Indians. But I'm not crazy about the execution. Many of the smiles look forced, as if someone told the people to smile for the camera. The looming, off-center heads are kind of distracting. And I'd describe the music as elegiac--just about the opposite of what should accompany the happy faces.

If it were me, I would've taken candid shoots of Indians smiling, joking, and laughing. I would've included the raucous sounds of their merriment. And I would've used a peppy tune to punctuate the images.

Below:  A stoic Hopi Indian photographed by Edward Curtis who resembles Billy Honanie of PEACE PARTY. 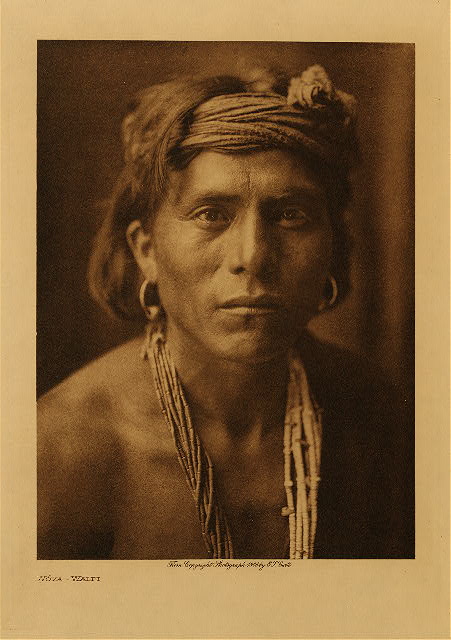 White people didn't smile in their pictures either. Maybe there wasn't a lot to smile about in the 19th century...

when did Curtis take the photos? In those early days nobody much smiled in photos - it was considered insincere and undignified. It wasn't until the 1920s that smiling became more accepted in photos, in the States at least, I don't know when it changed for other countries.

Curtis took his photos from 1906 on. I don't know if he told the Indians not to smile, but he certainly posed them as if they were dignified and stoic and nothing else. It would surprise me if he didn't stage-manage their facial expressions too.

Meanwhile, I don't think he took any photos of people dancing, cooking, playing games, gossiping, and so forth. In other words, nothing that would make the Indians seem like a thriving, happy people. That's the point of these comments: the lack of vibrancy in the photos.