In Honoring Indians with Swastikas, I noted how Indians and non-Indians used swastikas in the early 20th century. You can imagine why both groups stopped using them, but here's a particular act I hadn't heard of before:

Western use of the swastika in the early 20th centuryComment:  As with their exemplary record of military service, this act shows the Indians' patriotic love of America. Compare this with, say, Southern whites who embrace the Confederate flag or any whites who embrace a stereotypical Indian mascot.

For more on the subject, see Native Threads Accused of Nazism and Reclaiming the Swastika. 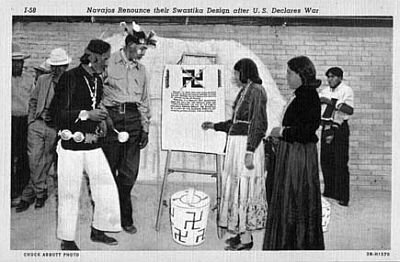