Brazil:  Indigenous tribes protest against Amazon damAnd:Comment:  This is another stereotype buster. While almost every work of fiction portrays Amazon Indians as primitive spearchucking savages, the actual Amazon Indians are organizing worldwide support, gathering hundreds of thousands of signatures, and presenting their demands to the government. The next time you see that in an Indiana Jones movie or FIRST WAVE comic will be the first time.

Below:  "Kaiapo Indians make their voices heard outside the National Congress in Brasilia." I presume the Kaiapo have dressed this way to make a point. Note that the lead Indian is wearing glasses. 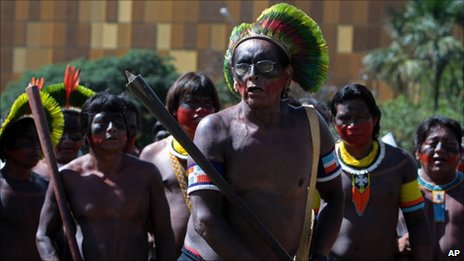 Yeah, indigenous peoples around the world have been organizing international support for quite some time. AIM is quite popular in Europe, for instance. And Tibetan independence is popular in pretty much any occidental country. In Japan, the Ainu have been of interest to Western anthropologists for over 100 years, made even more so with the discovery of Kennewick man and the link in the D mitochondrial haplogroup. The Maori have been getting some support in America, partially because of exposure in Whale Rider, Once Were Warriors, and the like. The list goes on.

This has its obvious value. When the UN boycotted South Africa, it was not very long until a democratic government was formed.