Hundreds of people have already posted comments on Bryan Fischer's racist screed against Indians. Here are some of the best ones: 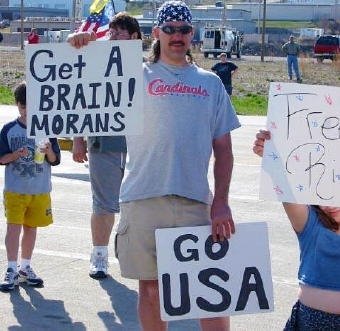 Comment:  A couple of the arguments are worth repeating:

Alas, mass murder and genocide have always been Christian "family values." The latest example is the tens of thousands of innocent civilians killed in Iraq. If a single Christian in America has mourned their deaths, I must've missed it.

For more on the subject, see Fischer:  Natives Had No Morals.
Posted by Rob at 10:51 PM

Yeah, I mean, Lakota sexual taboos included extreme postpartum sex taboos. Are we to assume that the high frequency of Irish twins in America in the 19th century makes them immoral by Lakota standards?

A Response to Bryan Fischer

Bryan Fischer is a sickening example of what a combination of religion and politics can/has come to represent to those of us who recognize his particular brand of willful ignorance and social/moral indecency.

I started to read Bryan Fishers and didn't get past This paragraph:

"Much of the early territory in North American that came into possession of the Europeans came into their possession when the land was purchased from local tribes, Peter Minuit’s purchase of Manhattan being merely the first. "

Ok.... Where do I start? My tribe is and has always been in the state of Connecticut. ANYONE who knows any native tribal history, or colonialism knows that tribes held no concept of land ownership. Therefore mr Fisher knows next to nothing about American history.

I say that because often people forget that the very way "America" was founded was through genocide, and off the labor efforts of african and native slaves as well as chineese indentured servants.

Individuals like Bryan Fisher are also a disgrace to the republican party, and a major problem as to why the party continues to have image problems when it comes to peoples ongoing perception that its history is stemmed in racism. It actually isn't.

I also want to point out that folks who claim to be of the "Christian right" are actually based in a continuous religious belief of puritism. One master race. They are historically responsible for the genocide against native American tribes.

I'm glad to see so many supporters come out against my Fishers comments. It shows that "America" may be growing and seeing through a very old and very dangerous ideology.

Mr. Fischer: You are either an
ignoramus or a liar--or maybe both.
Some of the Pueblos in New Mexico
and Arizona have been inhabited for
hundreds of years; the people who]
lived there were sedentary farmers.
The Cheyennes of the North American
Great Plains were noted for their
puritanical attitudes towards sex.
Many tribes had ARRANGED marriages.
And distributing blankets infected
with smallpox does not constitute
"savagery in warfare"? You are a
despicable person. Shame on you!