In Broken English (2007), a romantic comedy by Zoe Cassavetes, Parker Posey plays a thirtysomething New Yorker looking for love. Her first date is with Nick Gable (Justin Theroux), an actor. As the NY Times review put it:We first think Nick is a punk rocker because of his haircut. But it seems he has that 'do for a reason. Fresh from his role in Hit Man, this white boy's current assignment is playing an Indian.

As Nick explains it, he's starring in a movie called Rain Dancer as a mohatu (sp?), a Choctaw medicine man "who used to travel around poisoning the European settlers. He's kind of a bad guy, I guess." 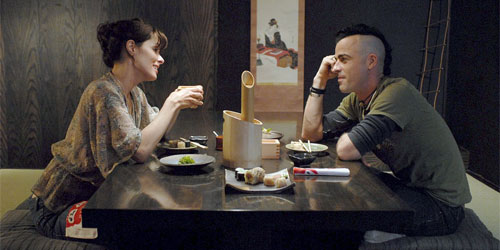 I can't swear that no Choctaw with a mohawk ever did a rain dance, but I'm betting against it. More likely, Cassavetes threw three unrelated stereotypes together to create a character bit. Indians do rain dances...Indians wear mohawks...and Indians kill whites.

Add the idea of a pale-faced Anglo playing a dark-skinned Choctaw and you have a perfect storm of ridiculousness. Although some Choctaws may be light-skinned today, recall that Nick is playing a traditional Indian from the 19th century. Because they lived in the South and intermarried with blacks, Choctaws are likely to be darker than average, not lighter.

As we saw in Next Step Wonderland, even the smallest mention of Indians gets things wrong. Even smart indie films portray Indians as primitives and savages. No wonder Indians can't trust anyone but themselves to get things right.

As for Broken English, I'd say it's your typical New York-based independent chick flick. There's nothing terribly bad about it but nothing wonderfully good about it, either. Rob's rating: 7.0 of 10.

Below:  The official trailer basically tells the whole story and quotes the best lines. If you love the trailer, you'll probably like the movie.