In Armenian and Indian Genocides, reader Stephen made a bunch of false or misleading claims about Islam. As usual with Stephen's rants, these comments were almost totally unrelated to the subject at hand. If you ask me, he posted them primarily to demonstrate his holier-than-thou attitude to the world.

His main source of info seems to be the ultra-conservative TheReligionofPeace.com. I could go down the list of this site's claims and rebut them in detail, but they're irrelevant to the genocide issue. But here are a few quick 'n' dirty points:

After you tell us how much of each book is violent, tell us what percentage of Muslims believe the Qur'an literally and what percentage believe it figuratively. Because many Christians and Muslims don't take their scriptures literally, you know. If 1.3 billion Muslims think and act peacefully even when the Qur'an tells them not to, I'd say Islam is peaceful by definition.

In conclusion, if your point was that Islam is as barbaric as Christianity, I'll agree. If your point is that Islam is worse, I can only conclude you're ignorant about the countless examples of rape, slavery, murder, warfare, totalitarianism, conquest, and genocide instigated by Christians. So which is it?

Some responses to your ridiculous claims about Muslims:Uh-huh, sure you are.

Since Muslims believe in Islam, the distinction you've made is worthless. How can Muslims be "good" if they sincerely believe in a religion that's "bad"? And if Muslims are "good" even though Islam is "bad," doesn't that prove the religion is harmless? Yes, it does.Yep, you're trying to dissemble about your prejudice so you won't look as bigoted as you really are. At this point, I think we all understand how you try to mask your "white pride" arguments as common sense.

If fans continue to claim The Departed is good even after you've informed them it's stupid, bad, and causes real-world harm, how are you attacking the movie but not the fans? Whether you realize it or not, you're implying they're evil for tolerating an evil religion. And you're certainly implying they're stupid and ignorant for practicing Islam, which is an insult in its own right.

That you're too cowardly to state your views upfront is consistent with your cowardly refusal to sign your full name. Luckily, I'm here to spell out the implications of your views for you.

9/11 worse than Inquisition?It's stupid and statistically invalid to compare events in the 1500s and in 2001 without considering the base populations. It's stupid, period, to limit Christian crimes to the Inquisition. Not when Christians were responsible for the two greatest examples of genocide in history.

More to the point, your claim is apparently false on the face of it. Here, learn about the Inquisition:

How many people were tortured to death during the Spanish Inquisition?Maybe you meant to say that Christian soldiers have killed more civilians in Iraq than Christian torturers killed during the Inquisition. If so, you'd be correct, finally.

Jesus trumps God?You can't "clearly reject" the word of God. The Old Testament is still part of the Bible and many Christians still believe it. Having both books in one volume sends a mixed message at best. It lets Christians pick and choose whether they believe the word of God or the word of Jesus. They're free to make up their own religion based on their selective reading of both testaments.

Homosexuality is a good example of this. The Old Testament condemns men lying with men, but Jesus said all you need is love. He didn't say one word about homosexuality, yet many Christians believe homosexuality is a sin. How can that be if Jesus's command to love thy neighbors is the final word?"If a man also lie with mankind, as he lieth with a woman, both of them have committed an abomination: they shall surely be put to death. Their blood shall be upon them." --Leviticus 20:13.

I call it Christianity. What do you call it?"I come not to bring peace, but to bring a sword." --Jesus, quoted in Matthew 10:34.

Are you really as ignorant as you sound? Christians have used the Bible to justify 2,000 years of crimes against humanity. If you're too stupid to understand how Christian theologians and politicians have applied their religion to the real world...well, the rest of us aren't.Which in turn are dwarfed by the Christian-based genocides I mentioned above. Sorry, bud...you lose the battle of the genocides. And you lose the debate.

What a surprise your comments were...not. The person who defends his white ancestors against charges of genocide is also bigoted against Muslims. The only real surprise is that I haven't caught you telling us how superior Western civilization is to Native civilizations. Maybe I just haven't been paying enough attention to your racist comments.

For more on the subject, see Kill Those Towelheads! and Brotherly Love, American Style. 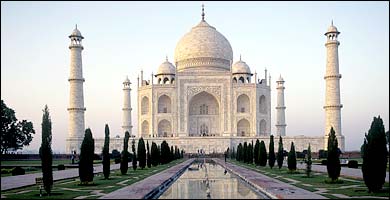