Bear's Den:  "Christmas is much about being … an Indian Giver"

Below:  Dancers at a potlatch ceremony. 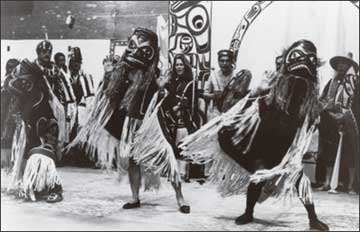 Good thing. Socialists are about as far from being philanthropists as you can get

Blaming socialism for these people's crimes is about as silly as blaming capitalism for the crimes of Columbus, Cortés, Pizarro, Jackson, Custer, et al.

Incidentally, Hitler was far from being a classic socialist. As Wikipedia explains:

In 1929, Hitler called socialism "an unfortunate word altogether" and said that "if people have something to eat and their pleasures, then they have their socialism." According to Henry A. Turner, Hitler expressed regret for having integrated the word socialism into his party's name. Hitler wrote in 1930, "Our adopted term 'Socialist' has nothing to do with Marxian Socialism. Marxism is anti-property; true Socialism is not."

You've mistaken socialism for communism or totalitarianism. They aren't the same thing.

Here's evidence that someone can be a socialist without being a freedom-hating fanatic.

Bolivian president Evo Morales and his Venezuelan counterpart, Hugo Chávez, are comrades in a self-proclaimed socialist revolution. But their standing at home couldn't be more different. Morales won a landslide reelection on Dec. 6; meanwhile, two thirds of Venezuelans now say they foresee a possible uprising against Chávez. Why the split? Turns out that Morales, for all his fire-breathing rhetoric, governs with far more discipline. Both he and Chávez have nationalized key industries, but while Chávez blew his windfall on poorly focused social programs, Morales has been a model of fiscal austerity. He built up enormous reserves; made smart investments in infrastructure, electricity, and microfinance; and diversified trade to depend less on the U.S. So while Venezuela is suffering from blackouts, water shortages, and double-digit inflation, Bolivia is growing faster than at any point in the past three decades. Now, that's downright radical.

There's no mistaking, as communism is a more hardline ("pure") form of socialism. A subset relationship.

So far, Evo's kind of an exception to the rule when it comes to socialism.. One has to be aware of how much personal power the changes in government give to him. Too often, the tendency is like what happened with Robert Mugabe, also a socialist. At one time an anti-colonial freedom fighter, but he evolved into a monster.

dmarks said...
This comment has been removed by the author.
2:59 AM

"They liken the traditional American Indian 'giving' to their new slogan of 'Sharing the Wealth'. Now, when they say this (the Progressives), it always means forcefully taking from some to give to others"

All societies require taxation and involuntary payments and the use of force. The article is rubbish.