Stereotypes in Call of Juarez: Bound by Blood

In Indians in Call of Juarez: Bound by Blood I presented the basic plot of this video game. Now here's more on the game's Indian subplot.

The McCall brothers are seeking a lost Aztec treasure. The Apaches have a medallion that reveals how to find it. The McCalls arrange to trade rifles for the medallion.

After a double-cross or two, the chief's son agrees to help the McCalls. As Wikipedia notes:It's not clear how the medallion went from being in Apache possession to missing in Navajo territory, but never mind. The video below is labeled Navajo Gameplay. It shows us the all-out "cowboys vs. Indians" action that follows--namely:

Apparently the video's POV is that of Thomas McCall, the younger brother. He's supposedly an expert with a hunting bow as well as a rifle. So the shooter attacking Indians with a bow and arrow isn't another Indian, it's a white man.

How wrong is this?

How many mistakes and stereotypes does this segment contain? Let's see:

While the rest of the scenery looks real and authentic, the Indian portion is a stereotypical shambles. I guess the game-makers didn't know much about Indians, or care. After all, Indians are all 1) the same, and 2) dead, so who cares if the game mixes Navajos with Plains tipis and Northwest totem poles?

So we have white men killing Indians because the Indians have a key to a lost treasure. In other words, for no good reason except greed. One could call this a metaphor for American history, but I don't think the game is sending that message. Rather, it's treating Indians like outlaws and wild animals: as just another dangerous obstacle to overcome.

Note how the Indians explode in a spray of blood when they're shot. Isn't that nice? Upset at how the brown-skins are taking over our country and socializing our medicine? Get even with them in Call of Juarez: Bound by Blood.

Later Barnsby, the colonel chasing the McCalls, "destroys the Indian village leaving only the chief and his son (Seeing Farther) alive." Wow. Does that happen off-screen? Or do we get to be Barnsby and commit genocide against the innocent Indian tribe?

What fun to kill an entire village of "redskins" and watch their bloody bodies explode! Call of Juarez: Bound by Blood must be the feel-good game of the year!

For more on the subject, see Video Games Featuring Indians.

Note the totem pole to the right of the hide-drying racks. Right-click on the image to view it full-size. 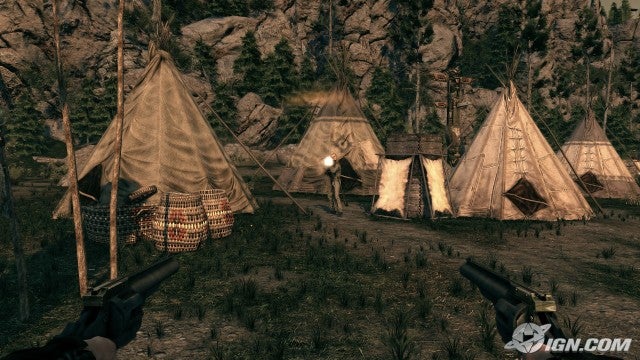 Googling the Navajo and tipis, I found little. But I did find this page

And here is a good general page on tipis:

You need to play the game to get the story. Wikipedia in this case is highly inaccurate. The Native Americans clearly hold the moral high ground in the actual story.

The story also explains how the Navajo came to have the medallian. The setting with the Apache is in North Eastern Arizona, so it is in the high country.

I agree the totem poles are totally wrong as is the dress for the Apache and Navajo. But a Polish company developed the game, so they might not have a grasp on those details which is too bad.

But I recommend playing the game before you review the story. And I would love to hear your take on it.

@Anonymous:
Actually, no; I am a reader of this blog whose homeland is not only the Southwest, but I am Hopi and Navajo, as well as raised in Northern Arizona. Needless to say, I do not need to play the game to know what's up or that this article has got it right. There is A LOT more to it than what you point out (issues with traditional dress) - the post mentions many of the glaringly obvious cultural and historical inaccuracies, as well as the blatant racism.
You know? People shouldn't develop games with Indians or anything "Native"-related in them if they are this ignorant. If it's so necessary for European game developers to bastardize, butcher, or otherwise fictionalize nations and cultures, they can do it with their own (or a people they actually come into contact with in their daily lives).

@dmarks:
That article has nothing to do with traditional housing, just saying.

I wouldn't pay too much attention to an "all-night Navajo tipi ceremony" conducted in Guadalajara, DMarks. In addition to not having tipis, the Navajos don't have "chiefs" these days. I'm not sure they ever did.

Yes, it looks like a New Age scam, although the Indian may be a real one. I presume the article writer is the one who labeled it a "Navajo tipi ceremony," not the "chief."

I don't think I said anything about the Indians not having the moral high ground. What I said was that it's wrong to turn an immoral attack on Indians into a "fun" game. If white villains are doing the killing, it's still wrong.

In short, you haven't done anything to persuade me the game isn't stereotypical. I continue to say it is.