SCALPED = comic of the year?

'Scalped' is year's top series, & The Rez is history

By Jerome MaidaApparently the main character is still a murderer:Comment:  These days tribal leaders can't get away with tax evasion, much less murder. If there were a hint of a tribal chairman's being a killer, the FBI would swarm over the tribe's government and probably shut it down.

So SCALPED's basic premise continues to be unrealistic and stereotypical. Indians as "savage" criminals, thugs, and lowlifes...ho hum.

Other than that, the writing and art may be swell. From what I've seen of them, they're both above average. 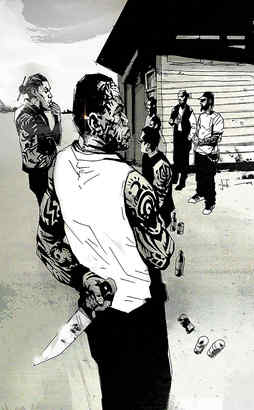 And you can even wear it on British T-shirts...