A blogger named Mighty God King has brought a minor character from a 1950s Western comic book to light:

Strong BowStrong Bow debuted in ALL-STAR WESTERN (1951 series) #58 (April-May 1951). He appeared in most or all of the issues through ALL-STAR WESTERN #99 (February-March 1958). His first 12 story titles give a hint of his adventures:

For DC's WHO'S WHO compendium, an artist rendered Strong Bow as follows: 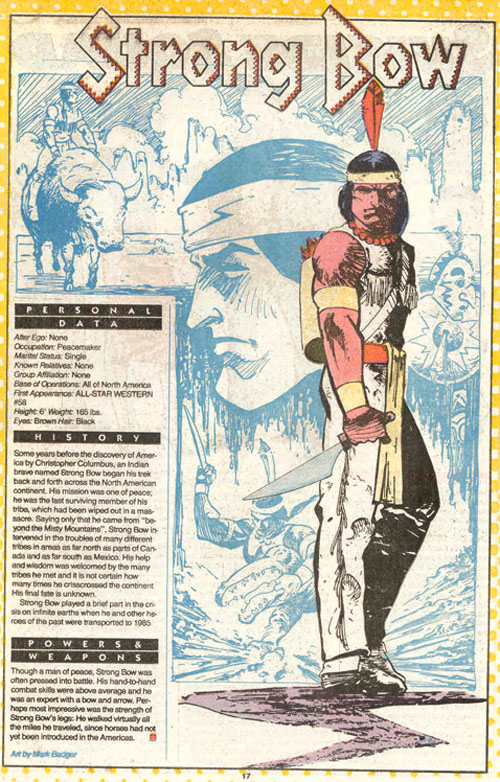 Summing it up, Strong Bow is riding some sort of hairless buffalo, stabbing a dinosaur with a knife, and posing ominously with his knife, which appears to be made of shiny metal. Never mind that the buffalo can't be domesticated and most Indians didn't have metal knives.

Why not depict Strong Bow with his trademark bow and arrow? Because firing an arrow into the distance isn't as dramatic as killing a dinosaur, I suppose. The artist has taken a man of peace and turned him into stereotypical savage warrior--a sort of Turok lite.

Here's what Mighty God King had to say about Strong Bow based solely on these images:

Thursday WHO’S WHO:  Strong BowThat's just great. The artist turned a peacemaker a la Hiawatha, who kills only when he has to, into a "stone-cold killer."

Actually, we don't know if Strong Bow killed the dinosaur or anything else. Maybe he just wounded it and let it go. But MGK is ready to celebrate Strong Bow's lethal nature.

When I saw this posting, I thought it was a classic case of stereotyping. The media (represented by the artist) takes a few facts about Indians and twists them out of recognition. A peaceful Indian occasionally used a knife so he must be a knife-wielding savage.

Mighty God King has swallowed this transformation of a peaceful Indian into a soulless killing machine. Americans have done this throughout our history of contact with Indians, who were basically as peaceful as anyone else. One hopes the readers of this blog aren't as easily duped by media-manufactured stereotypes.

For more on the subject, see Comic Books Featuring Indians.
Posted by Rob at 3:06 PM