A perennial assertion of anti-Indians forces is that Indian tribes were nomadic.  These tribes wandered aimlessly like flocks of birds, grazing off the land like herds of animals.

The point of this assertion is obvious.  If the Indians were wanderers, they didn't own or occupy any land.  They had no rights to their territories and the associated natural resources.

It also becomes difficult to imagine them as "nations" with laws and governments.  Or as cultures with places of worship and ties to the land.  Wanderers supposedly have nothing permanent; their existence is a constant series of changes.

Therefore, goes this "thinking," their claims of sovereignty are suspect.  They have no more rights than the Euro-Americans who displaced them.  Finders keepers, losers weepers.

A little thought shows how stupid this "nomadic" myth is.  Consider some basic aspects of traditional tribal history and culture:


In addition, we know Pocahontas supposedly saved John Smith in a Powhatan village.  The Pilgrims settled on the site of a Patuxet village.  Lewis and Clark stopped at several Indian villages along their route.  Etc.

The common theme here is permanence.  Almost everything we know about Indians says they settled and lived in one place.  Once you build a mound, longhouse, or totem pole, you probably don't carry it around with you.  Or leave it after you've invested so much time in it.

There's really only one exception to this rule.  Namely, the tribes of the Plains and a few areas of the West--e.g.,  the Rocky Mountains and Great Basin.  These Indians are known for living in temporary camps of tipis, wickiups, and similar structures.

Unfortunately, these are the stereotypical Indians of American mythology.  For many people, they're the only Indians they know about.  The only ones who count.  Never mind that we're talking about only one or two cultural regions of a dozen on the North American continent.  To these people, Plains Indians = all Indians.

Even for the Plains tribes, the "nomadic" label is dubious.  Some went from summer to winter camps and back, which isn't any more nomadic than a millionaire who moves from one mansion to another.  Some may have moved through a well-established cycle of different locations.  Some were forced to move by the incursion of other Indians or the white man.

Unless a tribe moved voluntarily and randomly, I wouldn't call it nomadic.  I don't know of any studies on the subject, but I'd say "nomadic" applies to only a minority of the thousands of pre-contact tribes.  Possibly a small minority.

For more on the subject, see Ayn Rand, Racist and Indians in War Before Civilization. 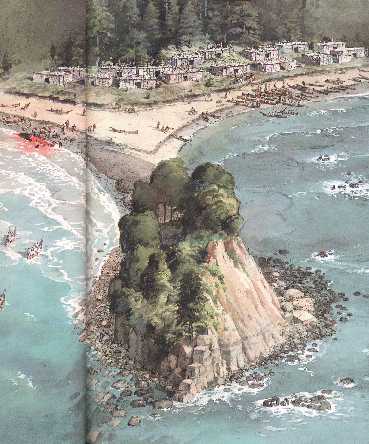 I'd say, to some tribes, the label "semi-nomadic" might apply. I think that saying that they were nomadic means they didn't own the land would be fallacious on the part of those using it to further their argument. It makes far more sense to me that they would own more land.

Then again, basing anything of the concept of land ownership is basically just more colonialist dogma and pisses me right off. The land is there, we live on it, we're a part of it, but no one owns it. If we have any right to it, it's that we treat it with respect. Which colonizers do not.

"Then again, basing anything of the concept of land ownership is basically just more colonialist dogma and pisses me right off. "

On the other end, many Indian nations had outright land ownership prior to, and regardless, of colonization. So to say this is colonialist dogma is rather incorrect.

"On the other end, many Indian nations had outright land ownership prior to, and regardless, of colonization. So to say this is colonialist dogma is rather incorrect."

Even if nations did practice outright land ownership, how are they not practicing a colonialist dogma? Would the phrase "Imperialist" make you more comfortable (I'm guessing not)? I would maintain that there were nations that practiced colonization (such as the Nahua peoples) in the Pre-Columbian era, though.