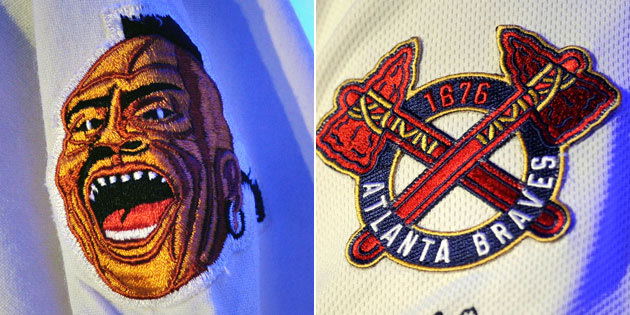 Comment:  A no-brainer...because the crossed tomahawks are so much more sensitive than the leering, shark-toothed savage. Gee, thanks for your sensitivity.

Someone on Facebook said the second patch is more sensitive, to which I responded:

With the emphasis on "more" sensitive. As in slightly more sensitive.

Alternate headline: "Braves replace one insensitive patch with another."

For the double implication that Indians were killers and evildoers, the Braves get a Stereotype of the Month entry.

For more on the Atlanta Braves, see Braves Haven't Helped Choctaws and Former Noc-A-Homa = (Oxy)Moron.
Posted by Rob at 8:07 AM