Almost everyone on the Internet has seen the "two wolves" story that supposedly comes from a Native legend. If you're like me, you see it a couple of times a month.

âpihtawikosisân goes on to explain what's wrong with this seemingly innocuous legend:Comment:  This legend is harmful for the same reasons a romantic painting is harmful. It teaches people that:


As âpihtawikosisân notes, even the lesson isn't Native in style. A typical Native lesson would be more like, "There's good and bad in each of us. You need to balance both halves to achieve harmony." Which is markedly different from the Christian dichotomy of black and white, good and evil.

Below:  Good wolf and bad wolf. 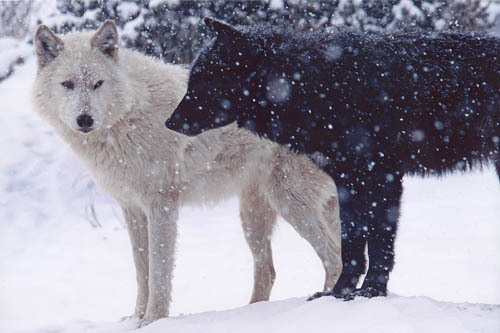 Jesus didn't teach dualism - black/white, good/bad, etc. But many brands of Christianity do. They're wrong.

"There's good and bad in each of us. You need to balance both halves to achieve harmony." Which is markedly different from the Christian dichotomy of black and white, good and evil. - somehow I think some natives might find that insulting... a little good "feeding someone starving", is best to balance with a little bad "raping someone".

As far as I can tell, the good wolf in original cherokee might also be "balanced" one, the bad wolf also means "lack of balance", with similar ideas of helpful or harming emotions and spirit, and a bit of different style in how point of story is told. It is matter of how you understand each of the words, for one guy on internet "faith" in this story is showing a balanced trust, for another guy "faith" means gullible belief without evidence.

Matter of using the correct shade of meaning for each of words in the story, then it fits the common sense of most cultures.

Horse came from white man, does it polute cherokee culture?

Given that written word of cherokee only goes back 200 years, and much of white man culture like horse was adopted before then, do we even know what is originally native ideas rather than adopted from europe and asia?