In Los Ciegos, the third installment of The River (airdate: 2/14/12), the explorers encounter their first Amazon Indians.

The crew is on another of their foolhardy jungle treks in search of Dr. Emmet Cole. They reach a cave and enter it. First they find a dead missionary's body--disemboweled and with the eyes and heart cut out. The know-it-all girl explains that it's the work of the Morcegos, a local tribe.

Further on they spot what look like glowing fireflies. But the things are actually the shiny eyes of bats. The bats swarm out of the cave, driving the explorers away.

A posting on Percy Fawcett, an Amazon explorer who disappeared in 1925, describes the Morcegos:The explorers don't connect the Morcegos to the bats. And neither did I until I read this posting. So The River is using a fictional Amazon tribe with subtle references to their legendary origin. So far, so good.

While the explorers sleep, we get a glimpse of the Morcegos. They've covered themselves in mud, which makes them look like blue-white specters. This happens enough in the media that it's almost a stereotype. The idea is that "savages" are so strange and inhuman that they resemble zombies, not flesh-and-blood beings.

The Morcegos leave "evil eye" symbols next to each of the sleeping explorers. The next day, Clark the producer shoots at something in the forest and kills a wild boar. He treats the animal's death as a joke.

Soon everyone starts losing their vision. The girl explains that the Morcegos are testing them with blindness. Only if they're worthy will the Morcegos let them survive and pass through their territory.

Some of the crew members retreat to the boat while others search for a remedy. The Morcegos stalk both groups. They pound on the ship's hatches, apparently ready to murder the interlopers. But Clark offers to sacrifice himself and the Morcegos, satisfied, disappear.

If you think about it, the Morcegos aren't evil. True, they kill trespassers horrifically, but only if they fail the test. Their punishments may be harsh, but at least they give trespassers a chance. They're merely enforcing their strict moral code.

That's a conclusion you may come to upon reflection. If you go by superficial
appearances, the Morcegos are murderous savages. They killed the missionary horribly for no obvious reason. They camouflage themselves to look like dead men. They leave "evil eye" messages. They threaten strangers without communicating their intentions.

In short, they resemble the deadly beast-men in every other stereotypical movie and TV show. I doubt the average viewer will think, "Those Euro-Americans got what they deserved for encroaching on Indian territory without permission." Rather, they'll think, "Another savage Indian attack on innocent white folks."

You could do the same basic story without making it so stereotypical. Have the Morcegos capture some crew members and explain the trespassing deal in person. Show the Morcegos as normal brown-skinned people, not white-skinned ghouls. Debate the morality of the pass-or-die rule a bit. If the chief is laying down the law, have a sympathetic Indian help the crew with clues.

In other words, don't portray the Morcegos as faceless, nameless creatures. Show them as human beings with diverse concerns and viewpoints. Whether people come from Western civilization or the jungle, they aren't packs of wild animals. Every person on the planet has similar thoughts and feelings.

A couple of snarky reviews agree that Los Ciegos was stereotypical. Their comments: 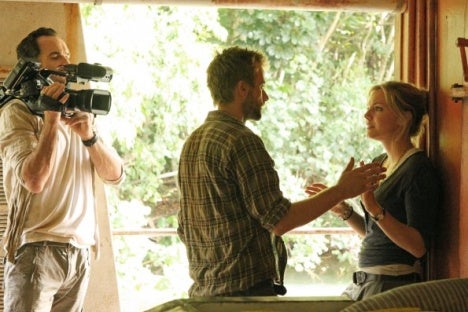