Mass murder in Gaza and Hiroshima

I posted the following quote from an article as a Facebook status:

‎"We need to flatten entire neighborhoods in Gaza. Flatten all of Gaza. The Americans didn’t stop with Hiroshima--the Japanese weren’t surrendering fast enough, so they hit Nagasaki, too."

In other words, kill all the brown-skins. Mass-murder them. If it takes genocide to secure Israel's illegal occupation of Palestine, so be it.

A decisive conclusion is necessary

There is no middle path here--either the Gazans and their infrastructure are made to pay the price, or we reoccupy the entire Gaza Strip.

This led to a discussion. First Samantha:Conservatives shout down anyone who re-examines Hiroshima, or Native American history, or the Founding Fathers. Etc. They're all about about upholding the myth of white Euro-Christian supremacy. Not assessing the facts rationally. 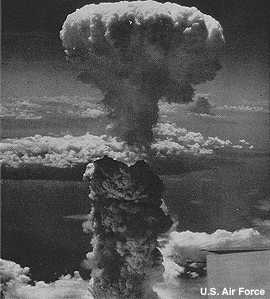 Apparently your uncle wasn't aware of the huge controversy surrounding the bombing and our possibly fictional "expecations." He should've questioned authority, like me, rather than swallowing it blindly.

Debate over the atomic bombings of Hiroshima and NagasakiFor instance, what did your uncle say to the alternative of threatening Japan with offshore explosions until they realized our resolve? If successful, that would've prevented the casualties on both sides. I guess we'll never know since the US went straight for mass murder rather than trying a moral alternative.

Debate over the atomic bombings of Hiroshima and Nagasaki--Militarily unnecessary

Most Americans also didn't second-guess the attempted extermination of the American Indian. Most Americans like to kill brown-skinned people at the drop of the hat.As I tweeted: For our "national security," the US killed innocent American Indian, Japanese, Vietnamese, and Iraqi civilians. Apply to Israel and Gaza.

It's a stretch to myopically claim that America's documented racism had nothing to do with the callous disregard for brown-skinned life in the cases above.

Israelis are white, not brown?

Oh, and if anyone's wondering about associating Israelis with America's white-skinned mass murderers, here's why it's legit:

Ashkenazi JewsAshkenazis are not the descendants of the Ancient IsraelitesWho are the Ashkenazi Jews?Israel's founders and a majority of today's Israelis are Caucasian rather than Semitic. 'Nuff said.

For more on the Indian-Palestinian connection, see Gazans, Indians Have Right to Resist and Gaza = "Largest Indian Reserve."