US more divided than ever?

Author Gyasi Ross talks with someone named Dennis at an airport:

Divisiveness, Drunken Pilots And Kim Kardashian: A Pigeon-toed Indian Pontificates About The 2012 Elections

For instance, the first few years of the Republic, when the western territories threatened to secede. Or the 1990s, when Clinton barely survived impeachment and Gore barely beat Bush in the popular vote.

Considering the Tea Party arose about five minutes after the scary black man entered the White House, Dennis's complaints are silly. Who was marching in the streets comparing Obama to a dictator or a terrorist before he'd actually done anything? The same people who wanted to secede after Obama won reelection. Carping conservative crybabies, that's who.

So when white men complain about "change," "divisiveness," or the loss of "traditional values," we know what they're really talking about. Their privileged status is eroding and they don't like it. They want to hold all the wealth and power, not share it.

For more on the subject, see White Men Lose to Demographic Change and America's "Bootstrap Theocracy." 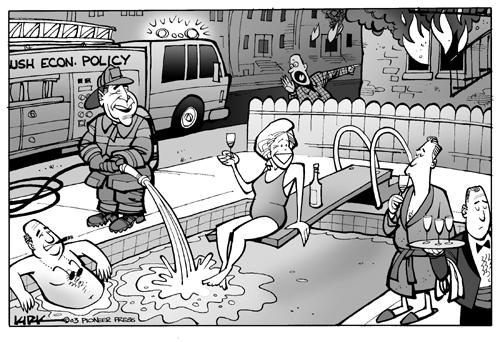 I disagree. I think the country is only divided as those that accept America's multi-cultural changes and those that cling to Anglo rule and it should be obvious which America is succeeding as majority now. The only divisions I see, are the racists screaming for continued white privilege and blaming Obama for surfacing their racism.