Some specific responses to Olsen's claims:

By Danica DenommeAn abbreviated version of another posting:

By White People HQComment:  Really...the people who built complex edifices to mark astronomical milestones had no mathematics, science, or astronomy? I guess the ancient astronauts came down and gave the Maya a calendar more accurate than anything in Europe, eh?

Denomme's and White People HQ's responses remind me of the essay I wrote in 1996 titled This Ain't No Party, This Ain't No Disco: A Columbus Day Rant. Check it out.

One quibble with Denomme. Some Native cultures did invent the wheel, but it was useless without beasts of burden, which basically didn't exist in the Americas. That's the main reason for the lack of wagons and chariots, not some romantic oneness with nature.

For more on the subject, see The Myth of Western Superiority.

Below:  An Inca toy wagon proves Natives understood the concept of the wheel. 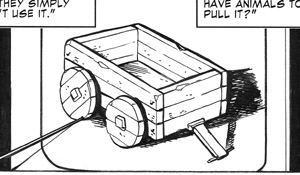 The "no written language" one is a lie. Basically it was developed by 19th-century anthropologists to explain why there were no records of the lost white race that blah blah blah. Even after hyperdiffusionism was discredited, they tended to place human habitation well within Flood geology, even though Flood geology had been discredited in the 18th century.

The no astronomy one is laughable. Indians simply didn't assume all our fortunes were tied to planetary movements. (Damn you and your retrograde, Jupiter!)

No domestic animals is funny because plants and animals can't just randomly be picked for domestication; the British tried to domesticate the zebra in South Africa, with the predictable results of zebra-driven chariots working exactly five minutes, followed by wild zebra rampaging through Cape Town. In terms of wild plants, corn's the most counterintuitive plant, in that its wild ancestor looks nothing like the plant itself, and corn is completely dependent on humans just to survive; you won't find volunteer corn. (In fact, groups like Monsanto use corn as a counterexample to the "GMOs are unhealthy" crowd, though I assume retroviruses aren't quite the same thing.) Wheels, by the way, are typically used with domestic animals. The only other use I can think of (at least until the clockwork era, but especially the steam era) is toys (which the Mayans had) or rickshaws (which were iconic of class issues among Maoists).

Similarly, sails aren't that useful unless you're traveling great distances, and even then you need a crew of rowers for when the winds either die down or work against you. (And not even by that much. A few degrees off can translate to several miles off.)

"Nothing that required hard manual labor" because slavery is soooooo awesome.

Goddammit, written music is less than a millennium old. Most music throughout history has not been written, and even today, orthographers are split over the best way to write tones. (áà or â?)

No medical discoveries is funny, considering quinine. Heh, a white dude took quinine, had a bad reaction to it, and somehow became convinced magic water cured everything. Modern medicine is only about a century old, though.

The funny thing about metallurgy is that a lot of metal came to Alaska via the Japanese current, and Eskimos used it. In Canada, you have the (surprisingly named) Copper Eskimo. Plus, gold was ubiquitous in ancient Mesoamerica.

For musical instruments, there was a bow-like string instrument, plus of course a number of flutes.

Indians indeed had zero mathematics, in that Indians had zero, and zero is pretty mathematical. The 2012 apocalypse was averted because the dude who was supposed to divide by zero in 2012 was killed by Cortes. ;)

Nanaimo fails, um, engineering, medicine, history, astronomy, and what all else?

Wheels aren't useless without beasts of burden. Ever hear of a ricksha, Rob? As Anon also mentioned.

There are other factors to consider. Look at the setting for the Inca empire: terrain that made wheel use extremely difficult.

Anon: You made some good points, but your confusion of astronomy with astrology was a big goof.

I understand. What I was saying was that Indians had astronomy (as does anyone capable of looking up), but not astrology (which has the oddball nature of being a divination method that is in no way random).

I doubt any culture has developed rickshaws without having the necessary infrastructure first. That would include beasts of burden, wheeled carts and wagons, and roads.

As Wikipedia confirms, "Rickshaws were first seen in Japan around 1868, at the beginning of the Meiji Restoration. They soon became a popular mode of transportation since they were faster than the previously used palanquins (and human labor was considerably cheaper than the use of horses)."

So no culture developed rickshaws in ancient times. I don't know the exact reason, but I suspect the development had something to do with a powerful ruling class and a surplus of human labor.

The physical stress of bouncing and jostling may have been an issue also. Developing a practical rickshaw may have required metalworking and production skills achieved only in the Industrial Age.

So I stand by my original comment. If no one developed rickshaws until 1868, it must be because they weren't a viable invention until then.

Same with bicycles, scooters, and other wheeled vehicles powered by humans. They weren't viable until modern times.