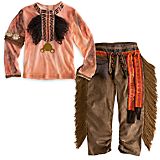 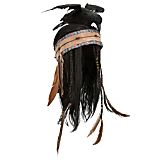 Comment:  Dress up as an authentic Comanche for Halloween! With a bird on your head! Because Johnny Depp respects Indians! #disneyfail

Did anyone think I was kidding when I posted the Tonto image below? Because I wasn't.

When you're Johnny Depp, I guess every day is Halloween. If you're not one fantasy figure, you're another.

With this move, Disney reveals its true colors. If anyone doubted it, The Lone Ranger is all about making money. Neither Depp nor Disney cares about Indians or they wouldn't allow this travesty.

In other words, all their pro-Indian gestures are phony and hypocritical. They're meant only to placate critics of their gross misrepresentation of Indians.

For more on The Lone Ranger, see Inside Scoop on Lone Ranger and Depp Admires Tonto's Giant Nuts.

P.S. This is the first time I've seen the bird explicitly identified as a crow rather than a raven. Now we know what it's supposed to be. 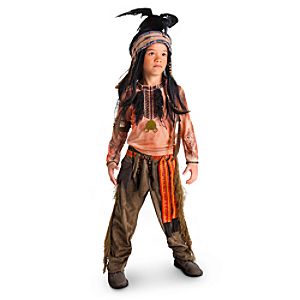 I can only conclude that Johnny Depp is a bird brain.

Heavy sigh....Told you so. My worst nightmare has come true. Fuck Johnny Depp and those traitorous so called NDNs.

Indian Country Today quoted me in its article on the subject:

"Neither Depp nor Disney cares about Indians or they wouldn't allow this travesty," writes Rob Schmidt at Newspaper Rock. "All their pro-Indian gestures are phony and hypocritical. They're meant only to placate critics of their gross misrepresentation of Indians."

More from the article:

The idea of children dressing in "Indian" costume is troubling to many in Indian country, for a number of reasons--the sort of costumes kids are taught to wear emphasize a warlike, Plains people, reinforcing stereotypes from Hollywood films and teaching children that Native culture is monolithic. Another disturbing implication is that it's ok to dress up as an entire race--actually, just one race, as few parents who let their young children go trick-or-treating dressed as "an Indian" would permit costumes of "a black" or "an Asian."