By Michael ZielinskiComment:  I gather the Treasury hasn't decided on a design yet. The article shows the alternatives for the obverse and reverse sides.

Two groups voted on these designs. The groups recommended a different design for each side. I'd go with the CCAC's choices--the ones described as getting the highest vote totals. They're shown below.

For more on the codetalkers, see Codetalker Congressional Gold Medals. 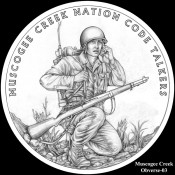 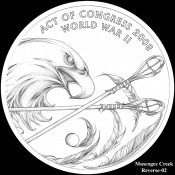