New Theory on Old Debate:  Comet Killed the MammothComment:  This is relevant because people have used the megafauna extinction to claim proto-Indians were greedy and rapacious rather than frugal and ecologically minded. In other words, it's the first evidence, chronologically speaking, that Natives were savage and barbaric. 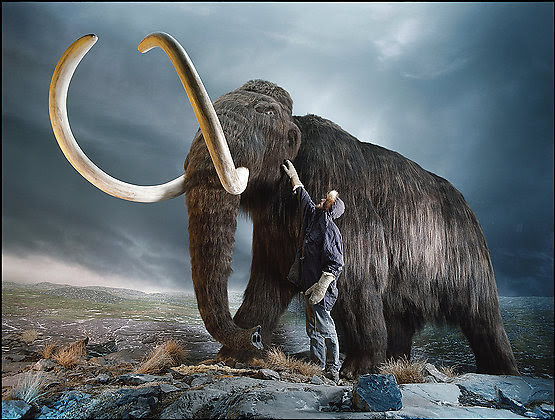 Writerfelola here --
But --- if it was a comet, then it would not have mattered that Natives predated on the mammoths at all. That's always the circumstances of situations: blame one factor as the main one and others reveal themselves later. North America's giant mammals disappeared when they were supposed to, and North America's human population had to survive the same factors. That they did not disappear means they were more adaptive. Until EuroMan arrived. Logical? Damn straight...
All Best
Russ Bates
'writerfella'

Writerfella here --
POSTSCRIPTUM -- There also is evidence that mammoths survived up to as recently as 2500 years ago, becoming isolated on islands in the Artic Ocean off Siberia. The changing warming climate reduced their food supplies and so the mammoths did what mammals always do under such adversity -- they changed size and shrank roughly to the size of Clydesdales. THEN they went extinct...
All Best
Russ Bates
'writerfella'