First gunshot victim in the Americas

Inca Skull Rewrites History of ConquestWhat this find signifies:The larger point about the clash of cultures:Comment:  This point also applies to Cortés's victories over the Aztecs. In fact, it applies to many of the European victories over Indians. The Europeans didn't win because they were superior morally, intellectually, or technologically. They didn't win because "primitive" Natives cowered at the sight of horses or guns. They won because they played one tribe against another, especially in the case of the unloved Inca and Aztec empires.

For more on the subject, see Was Native Defeat Inevitable? and The Myth of Western Superiority. 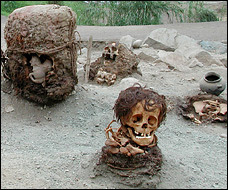