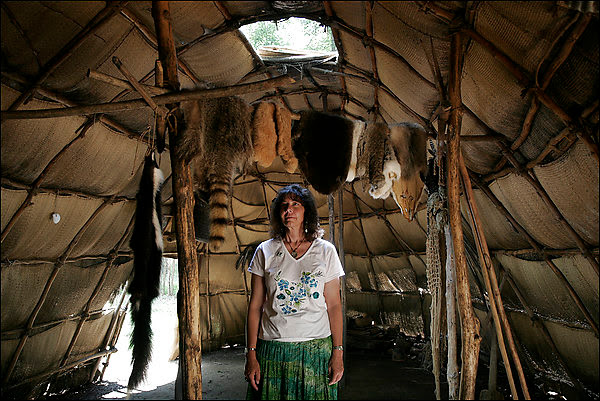 I'm so sick of these so called "lost tribes". How come they are always from back "east" and claim they "hide out" because of persecution. Same old tired story again.

I don't care how unattractive this makes me sound, but they don't look Indian to me!
If you take a look at their web site it has the usual trappings of wannabes, asking for donations and white people dressing up in regalia.

There aren't many tribes east of the Mississippi that still look "Indian." Would you say they're all a bunch of wannabes?

The article explained how a tribe can become "lost":

It is because of their painful history--of reservation lands lost in the 18th century, poverty in the 19th century and systematic racism in the 20th century--that Virginia Indians have survived in scattered remote communities, largely unnoticed. In fact, it wasn't until after the civil rights movement of the 1960s that many began reconstituting themselves as tribes, relearning their traditions and reconstructing their identities.

The Tribes east of the Mississippi don't look Indian because more than likely their not Indian.

And this same old tired story "It is because of their painful history--of reservation lands lost in the 18th century, poverty in the 19th century and systematic racism in the 20th century--that Virginia Indians have survived in scattered remote communities, largely unnoticed. In fact, it wasn't until after the civil rights movement of the 1960s that many began reconstituting themselves as tribes, relearning their traditions and reconstructing their identities" is the same story that most,if not all fake Cherokees and etc...tell VERBATIM!

As a matter of fact you have posted articles about the fake Cherokee Tribes with the same story line.

Just because it's in print doesn't make it true. So, don't believe everything read.

I've criticized "tribes" of wannabes who claim to be Indians (usually Cherokees) without proof. I haven't criticized federally recognized tribes who have a documented history and culture. Who have existed continuously since before Columbus, in most cases.

So the Chippewas of Michigan, the Choctaws of Mississippi, the Seminoles of Florida, the Iroquois of New York, the Penobscot of Maine...you think they're all fake? Why don't you go to one of their powwows and tell them that? Let us know how they respond.

Who's talking about federally recognized Tribes? I thought we were talking about the so called "lost" tribes, the ones that seem to "all" have the same story line.

I believe several of Virginia's tribes were once federally recognized. They were terminated and they're seeking to reverse the decision.

In addition, four of Virginia's tribes are state-recognized. Most or all of them have the "documented history and culture" I was talking about.

In short, these aren't wannabe "tribes" with no legitimate claim of being Indian. They're real tribes on the borderline of being federally recognized.

To rob:
There are 8 tribes recognized by Virginia. None have ever been federally recognized. None are on the "borderline" of federal recognition. Two have been "rcognized" since the 1600s (Pamunkey & Mattaponi) due to continuous reservations and legal contact with Virginia since then. The other 6 got recognition in the 80s and 90s via state proclamation. (Pamunkey & Mattaponi were added to the proclamation without being asked - still a source of contention). The other 6 are seeking federal recognition which is now stalled in the Senate. All 6 tribes have suspect history that likely won't meet federal standards. The truth is that state recognition is a feel-good maneuver aimed at gaining voters. It has little validity as states do not bother to research tribal histories.

I'm not sure when the official federal recognition process began. I was talking more about the unofficial recognition given tribes for the first couple of centuries of Euro-American history. In addition, I believe the nascent United States voided some British treaties recognizing Indian tribes.

Historically, Virginia's tribes were among the first Native people to encounter the Europeans. Their treaties, for the most part, were made with England--before the United States became a nation. Gradually, most of the Indian reservations existing within the state were terminated, and the Indians remaining, mostly Sioux, Iroquois and Algonquin speakers, from those nations were forced into assimilation or into segregated communities.

I'd say a bill that's halfway through Congress counts as "on the borderline" of recognition.

The U.S. House of Representatives voted unanimously May 8 in support of a bill that would grant six Virginia Indian tribes federal recognition.

By a voice vote, the House approved the legislation, making it the first time the tribes' bill has received approval from either the House or Senate.

"With today's vote, the Virginia tribes are closer than ever before to gaining their rightful place of honor," said Rep. James Moran, who introduced the bill, in a press release. "The Native Americans who greeted the first English settlers at Jamestown have endured many hardships to get to this point, surviving state-sponsored racism and a brutal repression meant to erase them from the historical record. Today's vote is the arrowhead needed to pierce these long-standing injustices."

As for state recognition, it depends on when it was granted. If it was granted decades or centuries ago, I doubt it has anything to do with appeasing today's voters.