A Proclamation By the President of the United States of AmericaComment:  I'm seeing a huge number of stories springing from the proclamation of American Indian Heritage Month. I'd say the concept is having the intended effect: increasing awareness of Native people.

For Blue Corn Comics' contribution to the celebration, see American Indian Heritage Month:  Resources for the media, schools, and the Web. 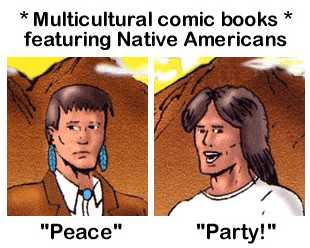 Writerfella here --
Time for the fratyernities at the University of Oklahoma to hold keggers and then roam the campus to urinate upon and then burn Native Pride Week displays of Indian Culture. Watch your screens, as a tradition growing out of the abandonment of an Indian mascot back in 1970 will be honored...
All Best
Russ Bates
'writerfella'

Do you have any evidence that this tradition started because the mascot was banned? Probably not.