Evidence of Fireworks in Ancient America?

By Gary C. DanielsDaniels provides other tidbits of evidence about the Duhare and the fireworks. He sums up the questions posed by this evidence:What's the explanation? Daniels offers a partial theory:Comment:  First, let's note the long chain of hearsay testimony. Explorer Lucas Vazquez de Ayllon supposedly saw the fireworks. Francisco de Chicora, who may or may not have been with Allyon, reported his sightings. Peter Martyr d’Anghiera later wrote about Chicora's testimony in a book. And columnist Daniels found d’Anghiera's writing somewhere and reported it.

Any of these people could be lying or exaggerating. The Spanish explorers often invented stories to impress the people back home. Hence the tales of El Dorado and the Seven Cities of Gold. Church officials may have invented "white Indians" to explain why the Natives were civilized rather than savage. And Daniels may be pushing an "ancient astronauts" theory for the same reason--to explain why the Indians weren't as savage as expected.

But let's assume everyone was telling the truth. Here are a few alternate theories to explain the people:

1) Some Indians were light-skinned by nature. The Spanish mistook them for Caucasians.

3) The local Indians used some physical or chemical trick not involving gunpowder to produce a fireworks-like effect.

4) The local Indians stole gunpowder from previous expeditions, learned how it worked, and used it to produce a fireworks-like effect.

5) A few Indians independently invented gunpowder, kept it a closely guarded secret, and used it in special cases.

6) The Duhare were descended from lost Chinese explorers who brought gunpowder with them. After they intermarried with Indians, the Spanish mistook them for Caucasians.

Since Daniels doesn't explain the fireworks at all, I think my theories are as plausible as his.

For more on related subjects, see Maya Ruins in Georgia?! and Madoc and the Welsh Indians.

Below:  "An etching of the Royal Fireworks display on the Thames, London, England in 1749." 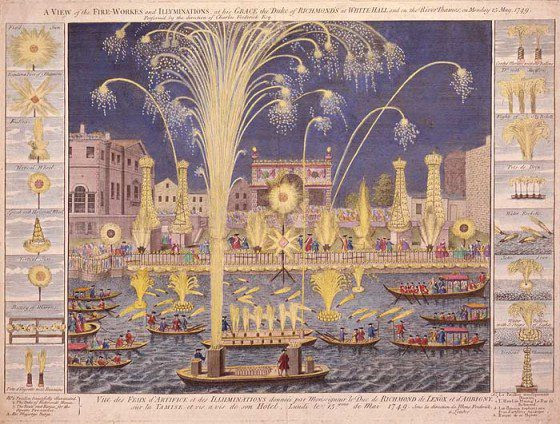 Technically, Occam's razor is "Entities must not be multiplied beyond necessity."

Basically don't add anything that isn't needed. A hypothesis must be elegant, meaning simple but functional.

"Occam's Razor says the simplest explanation is usually the best one"

And as per "truth is stranger than fiction", the real world typically defies the Razor, providing unlikely and amazing explanations.

The Razor does work sometimes, but it tends to be relied on way too much out of what is perhaps a basic human need to explain and order the chaos that the world presents to us. What better way to do this than a 'rule' that arbitrarily demands simplicity.