Adrienne Keene reports on some incredible blowback she received after writing about Johnny Depp as Tonto in her Native Appropriations blog:

Fortunately, disapproval of these attacks was swift and sure. Some of the many comments on Adrienne's blog:Comment:  Good thing Saginaw's people didn't try to call and harangue me because of my criticism. I would've kicked their butts all over the map if they had.

I added my two cents' worth to this chain of comments. Everyone knows what I think about Johnny Depp as Tonto, so you can imagine what I said.

I've received similar comments from Saginaw's people when I posted about Tonto on Facebook. And when I criticized Saginaw's "Uncle Tomahawk" role in the Cowboys & Findians episode of The Dudesons. So if Andrea and company claim they didn't say these things, don't believe them. 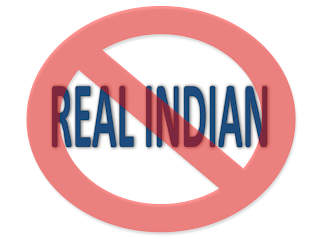 "Saginaw told me over and over again that the "Indian way" was "not to criticize" and that if I did so, I had "no right to call [myself] an Indian."

Wow. So many things wrong with that statement. Starting with the fact that there are many diverse views that are different "Indian" ways.

And that Saginaw is basically demanding that Natives (or others?) be like actual Uncle Toms and go quietly, and not complain or raise their voice about anything.

Have I covered it? I'm sure there's something else pretty bad here that I've missed.

Not everything is kosher from the other side, though. "Whats" said: "Who but a man could feel so entitled?"

That is sexism, and as bad as anything Grant said.

Anonymous said...
This comment has been removed by a blog administrator.
9:12 PM

Who the heck is Saginaw grant and who cares? I don't buy into this respect for elders crap either. Are these the same elders that sold out lands, cultures and ceremony to anthropologists while their grand kids become alcoholics and pass them up on highways? If your tribal chairman is corrupt or your grandparents hang out at the casino, where do the young matter?

You have a right to your opinions, right or wrong, otherwise, freedom is for certain age groups, races, etc,.

I met jay silver heels once, but I never saw him as tonto, only an aging man. Depp knows this role was gonna turn heads for him, but just the same, it has stirred debate inside and outside of Indian country, and I think it's about time.

Thank you, and moving forward

I am beyond humbled at the outpouring of support and praise I received after my last post. I am so grateful for your kind and powerful comments, tweets, emails, and phone calls--and it was so unexpected.

I wrote the post not thinking anyone was going to read the nearly 4000 word behemoth, and really just needed to put it all on paper to be able to move forward and write again without feeling silenced or worried. So I was a bit taken aback at the response, but I feel so very loved and supported, so thank you, truly.

As always, I want to clarify and reiterate some things before they get out of hand. If you read my words, you'll notice I don't attack any of the parties involved, I simply reported on the events that occurred, and quoted from publicly available comment streams, while saying how they made me feel. None of my original posts on Tonto and/or Depp mention, or even refer, to Indian actors in the film, nor do they even attack Depp. I questioned his choices, his words, and his mis-match between intent and action, but never him as a person. That's why all of these words against me felt so out of place and even more hurtful.