First Nations Omitted From War Of 1812 Re-EnactmentComment:  One detail missing from the article: Was this a reenactment of a particular event in Halifax? In which Natives might not have participated?

Or was it a general reenactment of the War of 1812, in which Natives were key players? In that case, the reenactment should've included them. 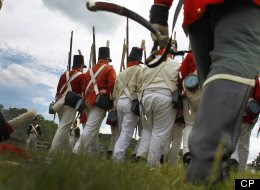 Email ThisBlogThis!Share to TwitterShare to FacebookShare to Pinterest
Labels: anniversaries, omission, War of 1812