Recently, Philadelphia's Mummers parade included white folks dressed as American Indians, Asian Indians, and blacks. Now another columnist has tried to defend this obvious racism. His key argument about why the parade was okay:

Thou Shalt Not Wear a Native American Headdress

Because this column appeared on the liberal-leaning Huffington Post, the comments were actually good--thoughtful and intelligent--for once. A sample:I posted some additional thoughts as a comment too:

What you and all those children were respecting, Thom, is a clownish caricature of Native culture. You know, the savagery of primitive people whooping and dancing and committing other acts of wild abandon. That's not what Native cultures were like.

You were not respecting real Native cultures--either those that existed then or those that exist now. If you were, you'd be volunteering on a reservation, supporting Idle No More, or writing pro-Indian columns. I'm guessing your "childhood obsession" hasn't translated into any of these actions.

Respecting a caricature of Indians is exactly like respecting blacks by supporting minstrel shows, Aunt Jemima, and Amos 'n' Andy. Do you consider those fair and honorable representations of blacks? If there's a difference, explain it to us, because I don't see it.

Nickels's closing argument is worth noting too. He tries to shift gears radically and ends up proving his critics' point:The response I posted:

What exactly is the point of your Turkish sultan anecdote? First you say you had a deep childhood reverence for Native cultures. As demonstrated by your cartoonish costumes and mock savagery, presumably. Then you say your "Turkish" acquaintance, and by implication the costumed Mummers, had only "a vague connection" to reality. In other words, these people were falsifying an ethnic group, not honoring it.

Which is it? Were the Mummers trying to "honor" Indians the way you supposedly did in childhood? If so, why did they wear phony costumes only vaguely connected to reality? Or were they and you stereotyping Indians because you were too ignorant to know any better? If so, why did you expect to get a pass for your belittling behavior?

For more on the subject, see Racist "Make Me Indian" App and Halloween = "Socially Acceptable Racism."

Below:  Kids who probably think about Indians the way Nickels did. 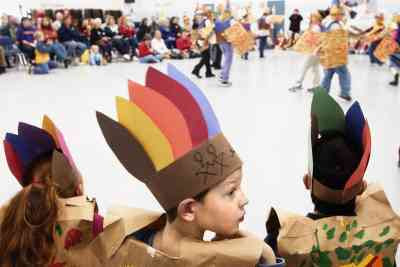 The following article appeared online a few hours after I posted my commentary. Either great minds think alike or Indian Country Today is following Newspaper Rock. Or both.

dmarks said...
This comment has been removed by the author.
4:45 AM