Comment:  It's good that the NMAI is tackling this subject in Washington DC. It seems like there's a groundswell of public discussion about the Redskins. Along with similar talk about the Atlanta Braves' retro batting cap. Perhaps these discussions can grow into a movement for changing the remaining mascots.

I wonder if this groundswell is tied into all the recent controversies: No Doubt, Victoria's Secret, Johnny Depp, Elizabeth Warren, Idle No More, etc. Perhaps these incidents are raising the collective consciousness that 1) Indians still exist and 2) they don't like to be stereotyped.

True, there's no clear connection between these controversies, but I claim they're connected. The connection is this: 1) Mainstream society claims Indian issues, along with Indians themselves, are trivial and don't matter. 2) Indians speak up, demand to be taken seriously, and mainstream society gets the message. Even if many people don't want to hear it. 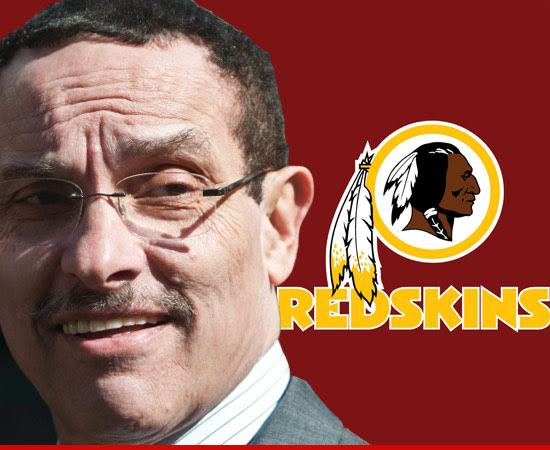 The Redskins name is really valuable, and really offensive. Here’s how to fix it.

Surely there should be a way to preserve that fan loyalty, that half-billion dollars in brand value, without keeping an offensive name. Here’s an idea:

Rename the team the “Skins.” Plain old “Skins.” It is a bit of a nonsense word for a mascot, but then so is the name of the Cleveland Browns (named for first head coach Paul Brown), or the New York Knicks (technically short for Knickerbockers, but just see how many fans at Madison Square Garden can tell you what a knickerbocker is).

Keep the burgundy and gold color scheme. Replace the face of an Indian chief on the helmet and logo with a picture of a football. Lose the Native American imagery altogether.

I've lived in DC my entire life...naturally I am fervently loyal to all of our teams, but that doesn't blind me from seeing how dumb it is to have a racial mascot, and I must say I'm really disappointed in how many people around here are clinging to it as something sacred, and have the audacity to act offended by those who point out its racist nature.

But I kinda like the idea of "the Skins" and wanted to add that it really wouldn't be such a nonsensical name...pigs have been a sort of unofficial secondary mascot of the redskins for a long time....we have a well known group of fans called the "Hogettes" who dress in drag and wear pig snouts, which itself is an old reference to the offensive line's nickname being "the hogs"....combine that with the old tradition of referring to a football as a "pigskin" and I think you'd have a recipe for a pretty badass looking hog mascot.

I can see it now....big burly piggy muscles and some threatening pointy tusks....

This is refreshing, and goes against the trend seen in the deep "blue", leftist/liberal/Democrat leaders and areas which embrace the worst in sports mascots: Cleveland and Washington D.C.