Harvard and the Making of the Unabomber

By Kirsten G. StudlienComment:  We see various people who lash out at themselves or others more often that average. Kids from dysfunctional homes...soldiers returning from war...minorities who experience poverty and racism...et al.

These articles confirm what I've said many times. Namely, that antisocial behavior such as crime, substance abuse, or suicide is triggered by environmental stress. If you alienate or abuse people, it's not surprising when they grow confused or angry and strike back. Murray apparently wasn't trying to create disturbed or sick people, but that's what he did.

Which is not to say kids from dysfunctional homes, soldiers returning from war, and minorities who experience poverty and racism are like the Unabomber. The only thing I'm saying they have in common is suffering stress from external sources. If they turn out wrong, it's because they were made, not born. 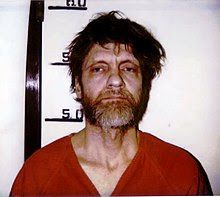