Indians in Bailey at the Museum

In Bailey at the Museum, the titular dog "tags along on a school field trip to a natural history museum." This museum is modeled on the Museum of Natural History in New York City.

The group first encounters a dinosaur exhibit, a Stone Age exhibit, and a mural of evolution. Next comes a section on Indians:

Harry Bliss's BAILEY AT THE MUSEUM 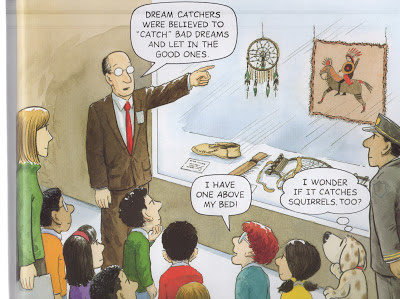 Comment:  Reese doesn't note what may be the worst problem: that the book includes Indians with cavemen and dinosaurs. Indeed, it sounds like something of a straight-line progression: from dinosaurs to cavemen to Indians. Perhaps some exhibits on civilization follow those on the "savages." Or perhaps the museum switches to other "natural" topics such as astronomy, geology, and meteorology.

Some museums still juxtapose Indians with nature, not humanity, but some don't. Bliss could've taken a more progressive approach, but didn't. That alone is enough to disqualify the book for discerning readers.

For more on Indians in children's literature, see Stereotypes in Tiger Lily and Funny Indian Names in Soonchild.
Posted by Rob at 9:00 AM

Blatant plug: check out William Walker "We Don't Live Like That Anymore: Native Peoples At The Smithsonian's Festival Of American Folklife, 1970-1976" AIQ, Fall 2011.