Seth Meyers pick: Why must late night be so white and male?

Seth Meyers is an affable, funny guy. But why in 2013 are we still looking for any diversity in late night?

By Mary Elizabeth WilliamsThis article led to an interesting discussion on Facebook:

Why the white hosts?The article mentions a few names. I think anyone who's carrying his or her own TV show, like Amy Poehler or Mindy Kaling, is an option. Kristen Wiig? Chris Rock? Eddie Murphy? Wanda Sykes? Julie Louis-Dreyfus? Ellen DeGeneres? Rosie O'Donnell? Anybody who can't or doesn't want to pursue an acting career--who wants an easy talk gig instead. And if someone already carried an afternoon show, why not a late-night show too?

As the article said, Conan O'Brien was an untested gamble, so why not a gamble on a woman or minority?Sykes did have a show that flopped, but she may have been trying to be edgy rather than mainstream. With a different approach, she might have different results.

Seth Meyers is 39, and his comedic approach on SNL isn't exactly young and hip. And Conan skewed a lot younger than Leno, so I'm not sure I buy the "young viewers" thing.

I think the article's point is that the networks tried O'Brien, Kimmel, Fallon, even Daly in late-late-night slots first. How much financial risk is there at 12:30 or 1:30?

So we're not saying put someone in The Tonight Show now. Rather, start grooming them for the big show like you do the white guys.Yes, obviously you want someone who can do the gracious host bit. I'm just saying there are as many potential hosts among women and minorities as there are among white guys.

You have to try them like the networks did with O'Brien, Kimmel, Fallon, even Daly before you can be sure. If you ever intend to go with someone other than a white guy, that is.The time to start priming the pump is now. Appoint someone to the late-late slot that Meyers is taking.

It's no good if we have to wait five years for the first appointment to a grooming slot that will take another five years to bear fruit. People like Bill Cosby, Cher, Flip Wilson, Carol Burnett, and Tony Orlando hosted variety shows decades ago, so what are we waiting for?

For starters, I'd ask the networks to explain why late-night viewers are mostly white males. These shows are basically talk, which--going by the stereotype--should appeal more to female viewers. If the white-male hosts aren't responsible for the white-male audiences, tell me what is.

Then I'd ask where the women and minority viewers have gone. Is someone seriously arguing that roughly two-thirds of Americans simply turn off the TV and go to bed, while the other third stays up and watches late-night shows? Show me the evidence for that and then we'll discuss it.

Or are two-thirds of Americans watching something other than white-male late-night TV? If that's the case, the networks are leaving money on the table. Whatever shows appeal to women and minorities, put those shows on late-night TV.

For example, do women prefer to watch The View? Then yank Kimmel or Fallon and put The View on at 12:30 instead. Give the majority--women and minorities combined--whatever they want.

It's idiocy to cater to one-third of the population while ignoring two-thirds. It's bad business. Good business is catering to every demographic group with money to spend.

Does that answer your hypothetical question?

By the way, I checked an article on late-night demographics. It didn't tell me much, but I found one interesting tidbit. The shows all want the 18-49 demographic, but they don't seem to be getting it.

Something like a third of Leno's viewers are 18-49. Kimmel may be leading percentage-wise with half his viewers in that range. Presumably the other half are in the uncoveted 50-80 demographic.

By a strange coincidence, that's how the general population breaks down too. Roughly half of adult Americans are 18-49 and half are 50 and up. So Kimmel's big achievement is that his demographic mirrors the country as a whole, age-wise. He's got old viewers and young viewers...wow!I'd say young viewers should be more open to alternatives of every kind. Different formats and approaches as well as different hosts.

So I'm not seeing a reason for sticking with the tried-and-true. If the 18-49 demographic is so important--another questionable belief--it argues against relying on the same old type of host.

"Reasoning is flawed"? NotI said it was good business to cater to everyone. You make more money that way. I'm not sure why we need to address the "social justice" argument when the business argument is compelling.

You're ignoring the fact that women make most of the spending decisions even if men earn more money. And that poor people probably watch more TV, because it's a cheap form of entertainment, and spend more of their disposable income, because it isn't invested. It's ridiculous to think well-heeled white men are the main people watching late-night TV or any TV.

Really, my points are right on and your objections are all off. Next?

Needless to say, the evidence supports my position. Here's a sample of it:

Blog: Women watch more TV than menBlack and minority children watch 50 per cent more TV per day than whites (and almost 90% have sets in their bedrooms), study finds

Look Who Controls the PursestringsIt's not surprising that women, who tend to rear a family's children, along with minorities, who tend to be poorer and have more children, would watch more TV than white men. TV is the entertainment of choice for people who are at home more, and that means women and minorities. I'm not even sure why this is in doubt, because it's patently obvious.

I think we've established that your hypothetical has little or no basis in reality. But since a hypothetical doesn't have to be plausible, I'll try again to answer your question.

Besides the compelling business argument, I'd say there's also a compelling "social justice" argument. We the people license the airwaves for the broadcasters' use. We arguably have a right to put conditions on that use. That means whatever we think is important: news shows for informing the public, educational shows for children, or programming that caters to diverse populations even if it isn't as profitable.

If broadcasters don't like it, they can go buy air-time on some low-access airwaves. And we'll give the high-access airwaves to someone else. Because again, the airwaves are a limited public resource, not some private free-market good that's none of our business.Sports and music as examples

"Neither one of us has any hard science to prove that advertisers SHOULDN'T be primarily courting white males."

I have the numbers showing that women and minorities watch more TV. All you have is speculation that the numbers are wrong or meaningless or something. Sorry, but data trumps no data every time.

"You're ignoring the possibility that white women may actually be more drawn to a white male host than a female one."

Are minorities also drawn to white males? Uh-huh, sure they are.

Actually, we have volumes of evidence on what kinds of hosts women are drawn to. The names of these hosts include Oprah, Ellen, Rosie, Wendy, Ricki, and the casts of The View and The Talk. The evidence strongly suggests that women prefer female hosts.

Will white men watch minorities? See the sports and music industries for solid evidence that they will. Will they watch women? I'm not sure, but that's what experimentation is for. Put on diverse hosts at 12:20 or 1:30 and see how they fare. I'm not hearing any excuse for whitewashing the wee hours when the risk of losing money is minuscule.

In short, your claims are mere speculation. I'm not ignoring this speculation so much as treating it as irrelevant. Since it has no basis in fact, there's no reason to discuss it seriously.

And let's note how you've switched from male audiences having more buying power to female audiences preferring the same thing as male audiences. In other words, you conceded that I was right about my previous points without saying so. Well, I'll say it for you: I was right.

To reiterate, your "white men dominate late-night audiences" scenario is hypothetical. In reality, there's no evidence that late-night viewers skew white or male.

But let's go back to your hypothetical once more. Let's say the audience for late-night shows is all white males, that white males make up a third of the population, and that every other demographic group is smaller. In that case, should the networks cater exclusively to white males?

The answer is still no. There are three major networks with late-night shows. In this hypothetical scenario, they're each competing for the same third of the total audience. Unless they perform exceptionally, they can hope only to split that audience and garner one-ninth (11%) each.

How is ignoring 67% of the audience and settling for 11% a sound business decision? The smart business move would be to let the other networks compete for a third of the audience and target the other two-thirds. Who cares about white-male income have when you have an audience six times larger (1/9 vs. 6/9) than your competitors? I'll take an exclusive hold on women and minorities over half the white-male market any day of the century.

No, the smart business move is to counter-program. If a show like Jackass corners the white-male audience in a particular time-slot, the solution isn't to put on a Jackass clone. It's to counter-program with a woman's show. Networks do this frequently because it's the obvious response.

This used to happen in late-night too. The other networks ran repeats of movies or TV shows, or programs like Nightline, against Johnny Carson. So the question is why the networks aren't following this strategy anymore? What makes white-bread talk shows the only late-night programming choice these days? 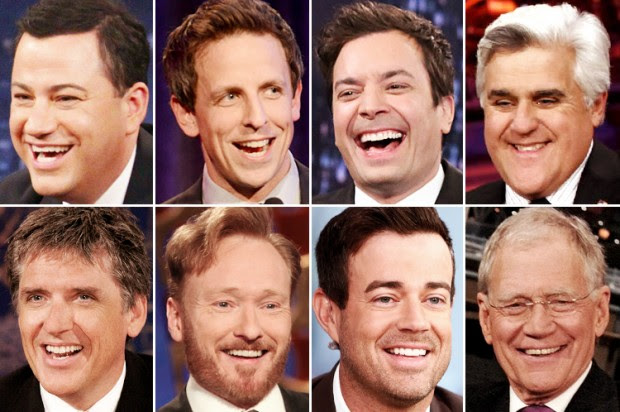 What, nothing on the new Doctor Who?