Last year the Catholic Church canonized Kateri Tekakwitha as a saint. She was born in a Mohawk village in what is now upstate New York. As an adult, she did a few years of religious work in what is now Canada's Mohawk territory. And she died there.

Both American and Canadian Catholics have claimed her, and sources have called her the first Native American or American Indian saint. This may be true if you limit these terms to the USA and Canada.

As I noted long ago, Juan Diego, the Mexican Indian who first saw the Virgin of Guadalupe, preceded Kateri Tekakwitha. The Catholic Church canonized him in 2002, so I thought he was the indigenous saint.

But I didn't realize other Christian churches also have saints. A blog informed me of another candidate for first indigenous saint:

The Russian River and Saint Peter the AleutWikipedia tells us more:

Peter the AleutComment:  Those crazy Catholics...always torturing and killing Indians in the name of God!

Wow, that's the most gruesome case of Christian torture I can remember. It's arguably worse than simply burning someone at the stake.

Note that a Russian ship with Aleut sailors were involved in the Island of the Blue Dolphins story about 35 years later. Strange to think of these people playing a part in California history.

Anyway, I gather the 1980 "glorifications" made Peter a saint. So he preceded Juan Diego by 22 years.

He wasn't an Indian, since "Aleut" falls into the Alaska Native category. And he wasn't a Catholic saint. But he counts as the first indigenous saint of the Americas--that I know of, anyway. 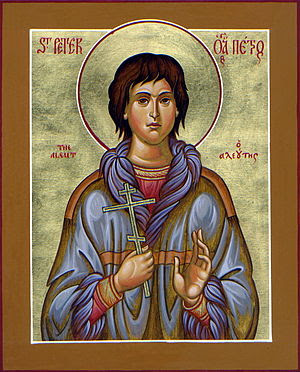 I generally assume there's some sadomasochism going on in Christianity. We find out that a lot of the martyrdom at the hands of the Romans (who were generally more concerned that you joined the military to help them expand the empire than which gods you worshipped) was made up after the fact.

And there was a local saint in France who was supposedly murdered by a Jewish gang for being Christian, which led to the king at the time leading a campaign against the Jews.

The king incidentally owed a couple Jews a lot of money. He staged what we now call a "false flag" operation to have an excuse to kill his creditors.