The myth of reverse racism 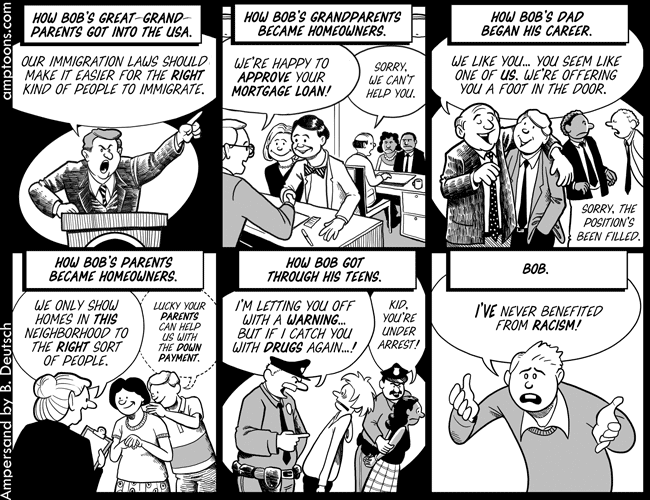 By Sara LuckeyAnd:Comment:  Don't bother bringing up Obama, Oprah, and various black sports and entertainment figures as if that proves anything. Critics have dismissed these arguments hundreds of times already--for instance, in The Obama/Oprah Myth. Unless you have a new argument, one we haven't heard before, do as Luckey says. Shut up and listen to the real victims of racism.

There is no reverse racism. It is all racism, and it does indeed include instances such as affirmative action denying white people of jobs just due to their skin color.

The final comic, by the way is completely invalid, since it doesn't look at people as individuals, but only generalizes on race.

" Shut up and listen to the real victims of racism."

Any individual denied opportunity due to skin color is a victim of real racism. Period...

@ Rob, he is the reason no one comes here anymore. You need to ban the little white whiner. I quite posting here years ago and only occasionally look in. Why did you let this racist ruin Blue corn??

So you agree there's no "reverse racism," DMarks? Great! There's just racism: primarily by whites against minorities, perpetuated by centuries of white privilege, reinforced by social structures designed to keep whites in power.

For more answers to your comments, see: