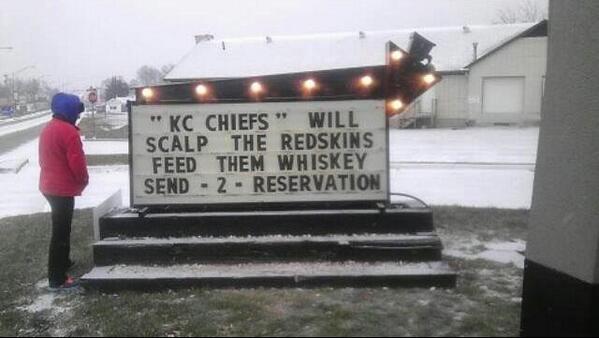 So the Sonic employee quickly removed the sign, Sonic HQ quickly apologized, and that's the end? Not quite.

I don't know about Sonic HQ, but the Sonic employee is either insincere or woefully ignorant of what's offensive. But the Redskins/Chiefs game and the resulting Sonic signs generated two social media campaigns.

By Vincent SchillingI believe this protest was planned before the Sonic signs came to light, but the signs fueled more activism.

A Tweet About Indian Mascots Went Viral; You Can Do It, Too

Meanwhile, criticism of "Redskins" continues from a variety of sources:

Who's come out against the Redskins' name now? Priests.

By Theresa Vargas
Posted by Rob at 5:35 PM